Liang Lan
Marine and Environmental Scientist
A study estimated that between 31,000 and 42,000 tonnes of microplastics (or 86 trillion – 710 trillion microplastic particles) are spread on European farmland soils each year, mirroring the concentration of microplastics in ocean surface waters.

Plastic particles smaller than 5mm (known as microplastics) are well-documented pollutants in ocean and freshwater habitats. The discovery of microplastics in the most remote rivers of the Himalayas and the deepest trenches of the Pacific Ocean has sparked widespread concern. But how much microplastic lies closer to home – buried in the soil where food is grown?

Our latest study estimated that between 31,000 and 42,000 tonnes of microplastics (or 86 trillion – 710 trillion microplastic particles) are spread on European farmland soils each year, mirroring the concentration of microplastics in ocean surface waters.

The cause is microplastic-laden fertilisers derived from sewage sludge diverted from wastewater treatment plants. These are commonly spread on farmland as a renewable source of fertiliser throughout European countries, in part due to EU directives that aim to promote a circular waste economy.

As well as creating a massive reservoir of environmental microplastics, this practice is effectively undoing the benefit of removing these particles from wastewater. Spreading microplastics onto farmland will eventually return them to natural watercourses, as rain washes water on the surface of soil into rivers, or it eventually infiltrates groundwater. 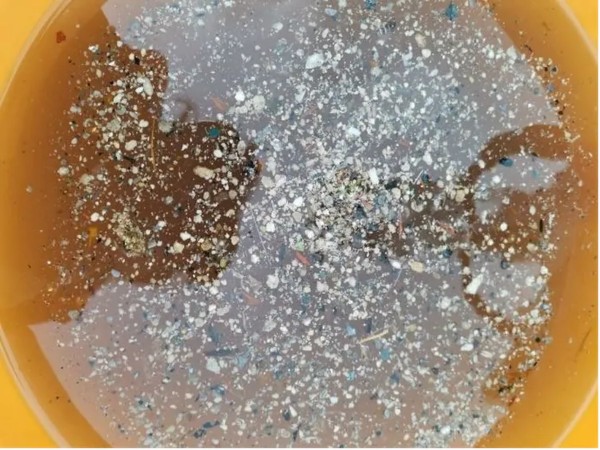 Wastewater treatment plants remove solid contaminants (such as plastics and other large particles) from raw sewage and drain water using a series of settling tanks. This produces an effluent of clean water that can be released to the environment. The floating material and settled particles from these tanks are combined to form the sludge used as fertiliser.

We found that up to 650 million microplastic particles between 1mm and 5mm in size entered a wastewater treatment plant in south Wales, UK, every day. All of these particles were separated from the incoming sewage and diverted into the sludge rather than being released with the clean effluent. This demonstrates how effective default wastewater treatment can be for removing microplastics.

At this facility, each gram of sewage sludge contained up to 24 microplastic particles, which was roughly 1% of its weight. In Europe, an estimated 8 million to 10 million tonnes of sewage sludge is generated each year, with around 40% sent to farmland. The spreading of sewage sludge on agricultural soil is widely practised across Europe, owing to the nitrogen and phosphorus it offers crops.

UK farms also use sewage sludge as fertiliser. In our study, the UK had the highest amount of microplastic pollution within its soils across all European nations (followed by Spain, Portugal and Germany). Between 500 and 1,000 microplastic particles are applied to each square metre of agricultural land in the UK every year. 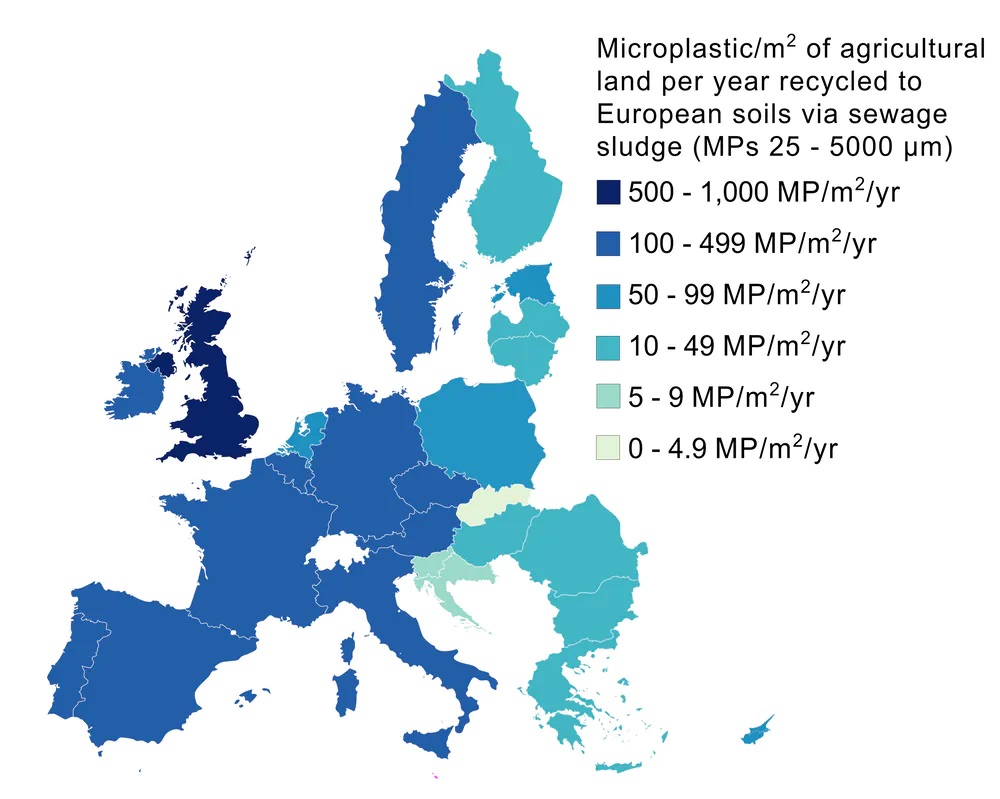 At present, there are no adequate solutions to the release of microplastics into the environment from wastewater treatment plants.

Microplastics removed from wastewater are effectively transported to the land, where they reside until being returned to waterways. According to a study conducted in Ontario, Canada, 99% of microplastics in agricultural soil were transported away from where the sludge was initially applied.

Until then, they have the potential to harm life in the soil. As well as being easily consumed and absorbed by animals and plants, microplastics pose a serious threat to the soil ecosystem because they leach toxic chemicals and transport hazardous pathogens. Experiments have shown that the presence of microplastics can stunt earthworm growth and cause them to lose weight.

Microplastics can also change the acidity, water holding capacity and porosity of soil. This affects plant growth and performance by altering the way roots bury into the soil and take up nutrients.

There is currently no European legislation to limit the amount of microplastics embedded in sewage sludge used as fertiliser. Germany has set upper limits for impurities like glass and plastic, allowing up to 0.1% of wet fertiliser weight to constitute plastics larger than 2mm in size. According to the results from the wastewater treatment plant in south Wales, applying sewage sludge would be prohibited if similar legislation were in place in the UK.

For the time being, landowners are likely to continue recycling sewage sludge as sustainable fertiliser, despite the risk of contaminating soils and eventually rivers and the ocean with microplastics.