Hannah Steiner
marine wildlife conservation and environmental activist
That's right, plant-based milk alternatives are now being made from potatoes. And it proves to be great for the environment and your health...

There’s trusty oat, almond, coconut, and soy. There’s even plant-based milk made out of peas, hemp, and sesame. But a lesser-known new concoction is potato milk.

And judges are billing it the best for the environment, whilst also being free from some of the main allergens.

What is potato milk?

Simply, potato milk is plant milk made from potatoes. Its texture is dubbed to be white and milky and it’s mild in taste.

Producing considerably less CO2 than dairy – it’s also considered more environmentally friendly than other popular plant milks.  According to the brand, it is twice as efficient as growing oats in terms of land use. And it requires more than 50 times less water than almond milk.

‘Our choice to use potatoes as a base means we have a super-sustainable drink’, CEO Thomas Olander told The Guardian.

The brand hopes to offer an alternative to plant milks given a bad name for environmental impact. For example, soy milk is often deplored for its links to deforestation. However, there is mounting evidence that indicates land cleared for soy production is for animal agriculture, rather than to produce plant milk. In fact, 80 percent of soy crop is grown as feed for livestock animals.

Vegetarianism; a Way to Save the Planet

Additionally, almond milk is widely considered as the worst plant milk for the environment in terms of water use, land use, and emissions. To produce just one liter of milk requires a staggering 371 liters of water, for example.

It is also criticized for pesticide use and has been blamed for causing lasting droughts in California – where 80 percent of the world’s almonds are grown.

But whichever plant milk you choose, all have a lower carbon footprint than dairy: with nutritional and ethical benefits alongside. 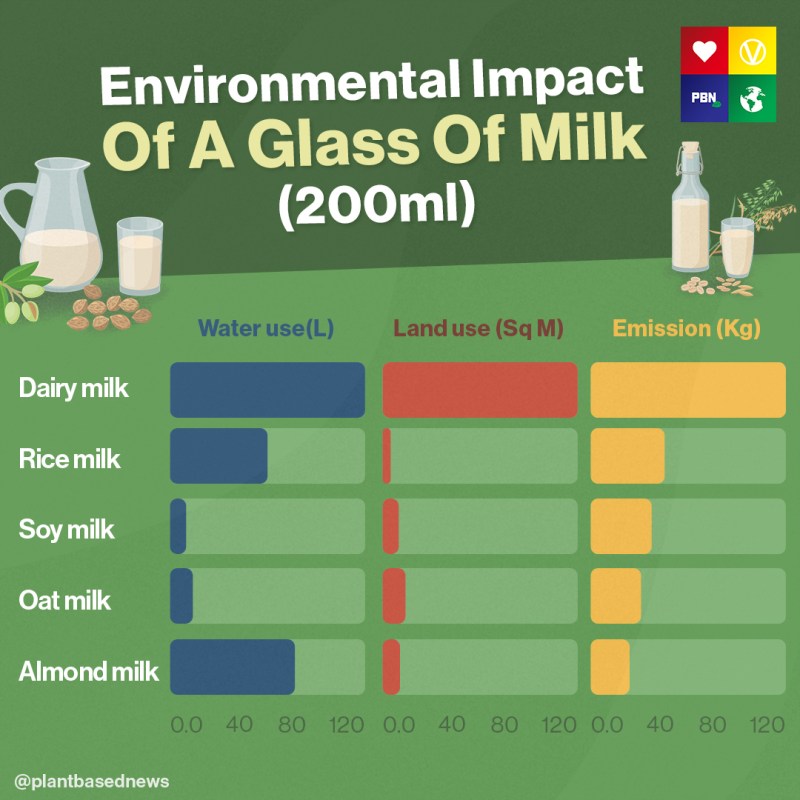 Despite this, there are many who persist that plant milks, in general, are damaging to the environment. This includes concerns about air miles or protecting local farmers.

But dairy is extremely carbon-intensive, from the vast amounts of methane gas released to growing feed to raise livestock.

Moreover, it creates around three times the amount of greenhouse gas emissions than plant alternatives.

Environmental benefits aside, the humble potato is packed with goodness.

The root vegetable contains a host of health benefits, such as providing a good source of fiber, vitamin C, potassium, and magnesium. Moreover, they contain antioxidants which may help reduce chances of developing chronic diseases including cancer.

Due to high starch content, potatoes are also linked to improved digestive functions.

So, is potato milk the future of plant milk?

potato milk environment CO2 water
Four ways to tackle the climate and biodiversity c ...
The SDGs against the problem of food waste

How Poverty Cause Environmental Degradation?