Hannah Steiner
marine wildlife conservation and environmental activist
International Mountain Day is held every year on 11th December, to build associations that will bring positive change to mountains and environments.

It also provides an event to show the variety and richness of mountain cultures, boost mountain identities greatly and ensure that indigenous rights and traditions are recognized.

Mountains are some of the most beautiful, magnificent and amazing structures in the nature, impassive and splendid they stand against the sky, of such a size that they can catch entire countryside’s in their shadow, and turn back the ravages of storms against their unflinching sides.

They are the source of recreation and resource, with snow covered sides providing ski slopes to enthusiasts, and minerals in abundance to those brave enough to delve into their stony sides.

In some parts of the world they are also a source of agriculture, providing sufficient space for the production of those products that grow best on their slopes. Coffee, Cocoa, Herbs, Spices, and the form of handicrafts that spring from the minds of those who live in the unchanging protection of these towering edifices to geology. Mountains play a critical role in moving the world towards sustainable economic growth. International Mountain Day is your opportunity to head out and appreciate these unique landforms, and all they have to offer.

These are some interesting facts about mountains

The importance of mountain

This year, the theme for international mountain day is named “mountain matters”. Despite they are mentioned in the 2030 Agenda, mountains are still often forgotten. Considering the crucial role they play in providing key ecosystem goods and services to the planet and their vulnerability in the face of climate change, we need to step up and take care of the mountains.

4 key points about influence of mountains on other things

As we mentioned, mountains really matter in our life and they affect many things all around us. Here, we intend to discuss a few things that are influenced by mountains.

Water:  About 80 per cent of our planet's fresh water originates in the mountains. However, all available records indicate that ice masses in mountain ranges around the world are disappearing due to climate change. At least 600 glaciers have disappeared completely over the past decades, affecting water supplies relied on by billions living downstream.

Tourism: More than 15-20 percent of global tourism is around mountains areas and are regions of important cultural diversity. Although mountain tourism has the potential to promote economic development in remote and isolated regions, many mountain communities are still living in poverty.

Biodiversity: Mountains are covering half of the world biodiversity hotspots and support almost 25% of terrestrial biological diversity. Mountains are home to rare animals such as gorillas and snow leopards as well as strikingly beautiful plants such as orchids and lobelias. 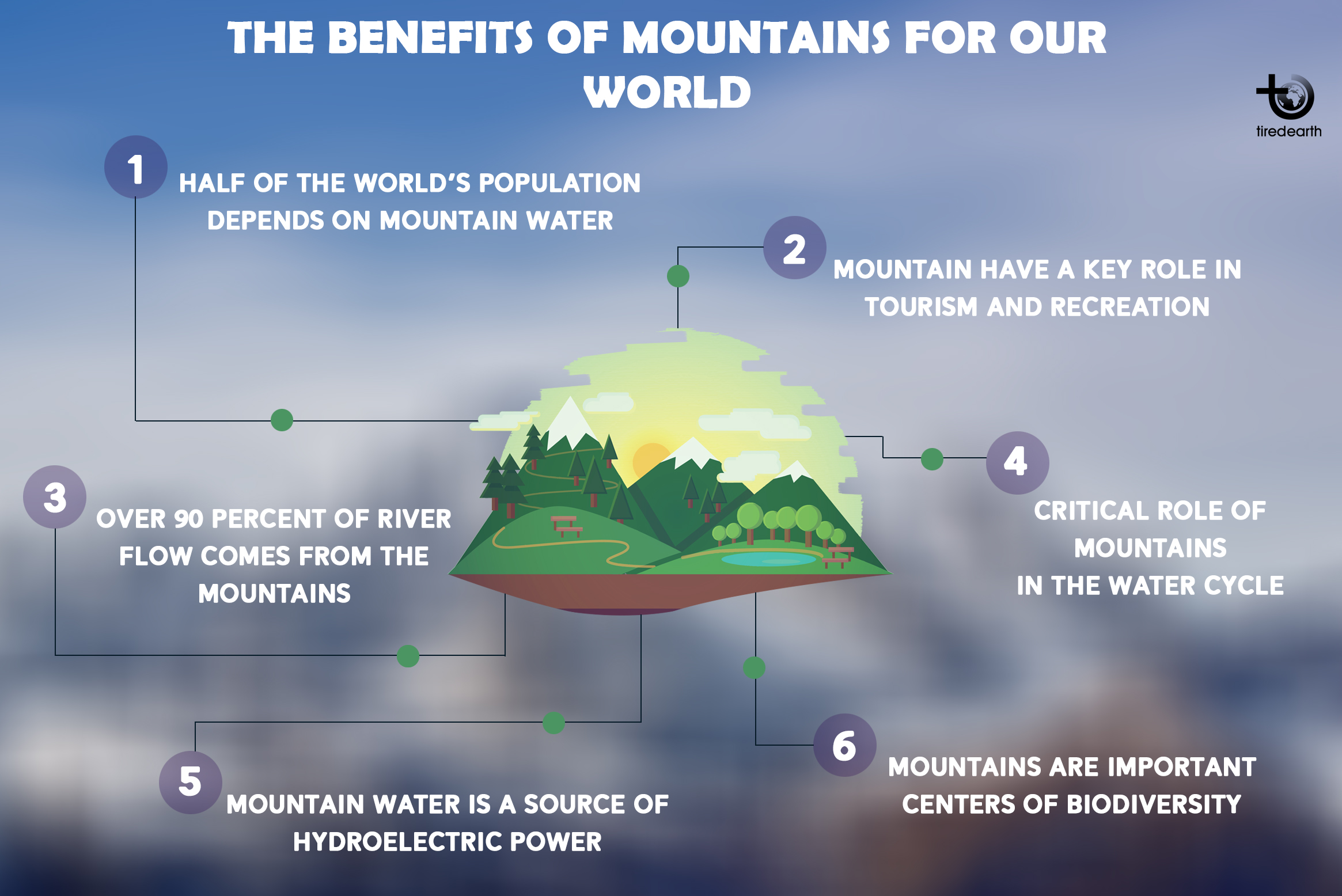 Climate change is a big issue for the mountains as temperature is rising. It cause so many difficulties for mountain people who are arguably the poorest and hungriest people in the world. The rising temperatures also mean that mountain glaciers are melting at unprecedented rates, affecting freshwater supplies downstream for millions of people. However, Mountain communities have some valuable knowledge and strategies accumulated over generations, on how to adapt to climate variability.

Climate change combined with political, economic and social marginalization, increase the vulnerability of mountain peoples to food shortages and extreme poverty. Currently, about 39 percent of the mountain population in developing countries, or 329 million people, is estimated to be vulnerable to food insecurity.

Migration is another issue related to the mountains. As mountain populations grows, migration increases both abroad and to urban centres. Those who remain are usually women, left to manage the farms but with little access to credit, training and land tenure rights. Out-migration from mountain areas will also result in an immeasurable loss in terms of provision of ecosystem services and preservation of cultural and agro biodiversity. Investments and policies can relieve the harsh living conditions of mountain communities and reverse out-migration trends from mountain areas.

Threats to the mountains

Increasing of population force people to farm unproductive regions. Almost half of Africa’s mountainous regions are now used for cultivation —10 percent for crops and 34 percent for grazing.

Most of the time this farming brings only small benefits, since these highlands are not ideal for growing crops. And overgrazing by cattle easily destroys the fragile vegetation. A recent study shows that only 3 percent of all mountain land is suitable for sustainable agriculture.

Many mountain environments have been destructed by increasing of civil wars. Rebels use mountain sanctuaries as the base of their exploitation. A United Nations report calculates that 67 percent of Africa’s mountainous regions have been affected by “violent human conflict.” moreover, some highlands have become centers of drug production, which often leads to armed conflicts as well as degradation of the environment.

Building roads, mining, dams and other development projects planned for the next 30 years are threating 25 percent of mountainous regions in the world. The construction of roads can cause erosion on steep slopes, and the roads provide access for loggers, who may do much more damage. Mining operations extract about ten thousand million tons of ore every year which much of it from mountains.

The value of mountains for the future

The values of mountains are undeniable. They influence regional climates and weather conditions. They cover almost 22% of the earth's surface and are home to 720 million people around the world. Billions more living downstream also benefit from mountains indirectly.
Mountains provide us with freshwater, energy, food, biodiversity, and medicinal products – resources that may become very rare in the coming decades. They are also very prone to climate changes, land degradation, deforestation and natural disasters. In addition, mountain people very often face marginalization, poverty, and the lack of basic services such as health and education.

As we mentioned before, there are many dangers that threat the mountains. They are so important to our planet and we need to protect them in whatever costs. We need to tell the world that the current neglect of mountains and mountain peoples must stop. Mountains provide many resources for us. Our challenge is to identify new and sustainable opportunities that can bring benefits to both highland and lowland communities and help to remove poverty without contributing to the degradation of fragile mountain ecosystems. 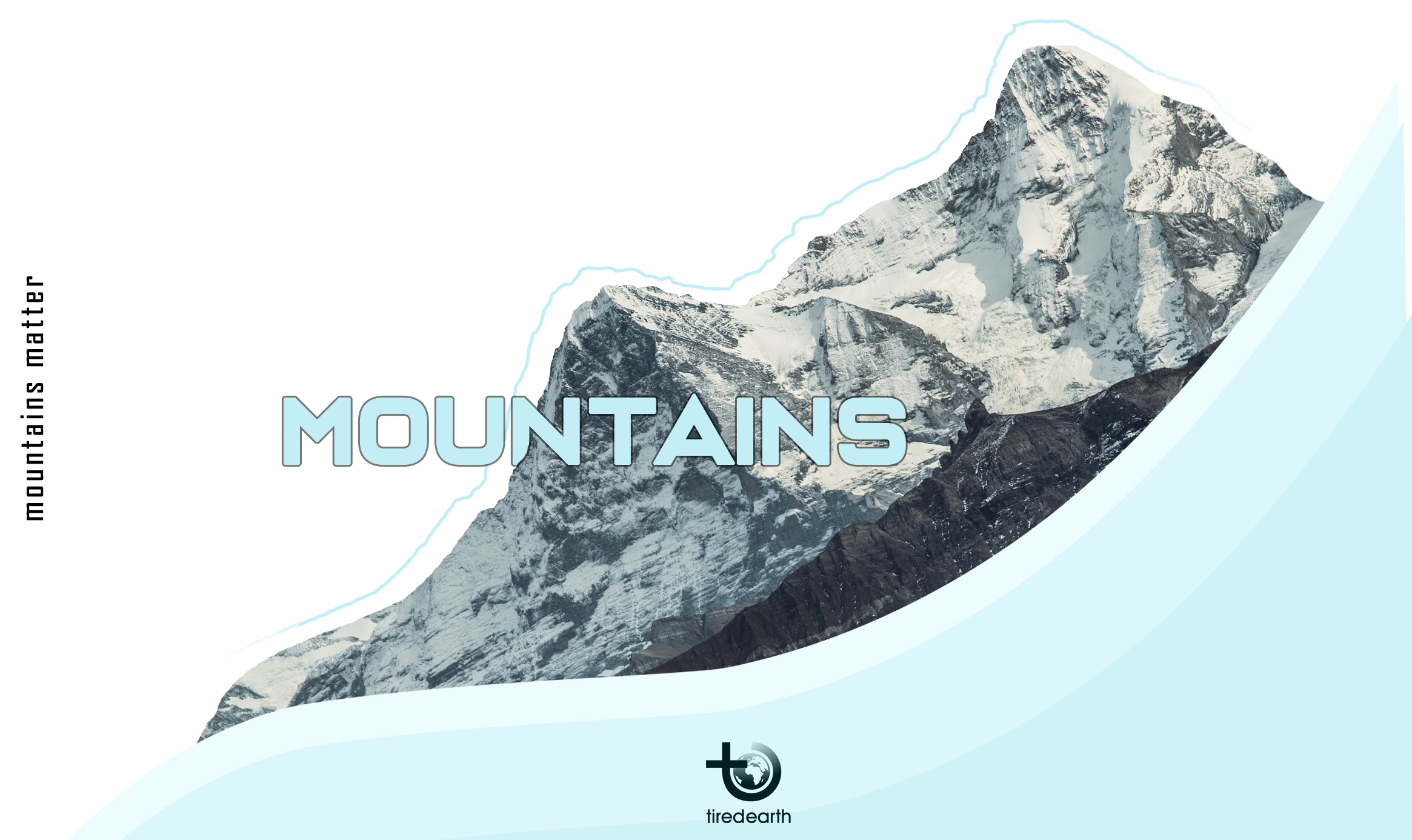 The importance of mountain in religions

Most of religions, Abrahamic and Non-Abrahamic, see some mountains as sacred places. If we look through the scriptures of deferent religions, we can find at least one or more Sacred Mountains. They are often seen as a site of revelation and inspiration. For many, the most symbolic aspect of a mountain is the peak because it is believed that it is closest to heaven or other religious worlds.

Mountains are mentioned frequently in the Bible because of many stories in the Bible takes place there. For this reason, mountains and hills are mentioned more than 500 times in Scripture. Mountains have a logical religious symbolism for Jewish and Christian cultures since they are “closer to God” who dwells in the heavens.

The mountains of Sinai and Zion are most significant in the Old Testament because it is the place where Moses received the gift of the law, the Ten Commandments.

Zion, to the south, is the location of the Jerusalem Temple.

In the New Testament (Mark and Luke to be precise), Jesus appoints the 12 disciples on a mountain. In Matthew’s Gospel, Jesus delivers the Beatitudes in his Sermon on the Mount, conjuring an image of Moses who received the Ten Commandments on Mount Sinai. (Matthew’s mostly Jewish audience would immediately pick up on the comparison between Moses and Jesus.)

The other one is mount Tabor, where it is supposed Jesus was revealed to be the Son of God. Muhammad is said to have received his first revelation in a cave called Hira, located on the mountain Jabal an-Nour, near Mecca. According to biographies of Muhammad, while on retreat in a mountain cave near Mecca (the cave of Hira), Gabriel appears before him and commands him to recite the first lines of chapter 96 of the Quran. This revelation took place after 40 days, holy prophet was worshiping God there.

Muslims believe that the world was created by God which warrants respect, obedience and gratitude towards Him. This includes respect of animals, other people, and the environment. And because any act that leads to its destruction or degradation leads necessarily to the destruction and degradation of life on earth, such acts are categorically forbidden.

Besides, in holy Quran, we have some verses about the importance of mountains for our world. These verses introduce mountains as creatures that prepare considerable amount of our fresh water sources and the main factor to keep our planet in balance:

“And the earth, after that He has spread it out; from it He has brought forth its waters and its pastures, and He has made fast the mountains, a provision for you and for your cattle.” (79:30-33)

“And the earth, We have spread it out, and made in it mountains standing firm, and grown in it everything in balance.  And We have provided in it sustenance for you, and for those whom you do not support.” (15:19-20)

However, mountains are sacred places in most of religions and the main factor to keep the earth in balance and preparing fresh water and pasture for us.