George Scott
Editor- environmental activist
We're facing a triple crisis (climate change, pollution and biodiversity loss). The three crises are all connected because the planet is one single, interconnected ecosystem. Any pressure on any Earth system will have an impact on the rest.

Photo taken on Aug. 14, 2022 shows the view of a dried riverbed near the source of the River Thames, southwest of the town of Cirencester, Britain.(Photo: Xinhua)

Elusive bitterns, colorful kingfishers, majestic grey herons, harvest mice, and willow tits, one of Britain's most threatened resident birds... visitors can spot an array of wildlife in the undergrowth of Fairburn Ings, a nature reserve in the Yorkshire region of England.

Once a coal mine, Fairburn Ings has transitioned from a dumping ground to a haven for wildlife during the past 60 years. It is now a wetland with a mixture of habitats and an important site for breeding and wintering wildfowl.

Owing to its areas of open water, reedbeds, grasslands and wet woodlands, the nature reserve is classified as a low-risk site for fires.

However, the extreme high temperatures this summer have dried out the undergrowth and turned the site into a dangerous area. Dry leaves and twigs make perfect kindling.

A wildfire back in July wiped out 16 hectares of the reserve, the equivalent of about 20 football fields of rich ecology. Many vulnerable species fell prey to the relentless flames, smoke and ash.

The fire destroyed countless animals along with their habitats. Those that survived will find it difficult to reproduce and forage there, the Royal Society for the Protection of Birds (RSPB), a charity with an international reputation, said.

The wildfire will set ecological reconstruction backwards by about 30 years in some areas, commented site manager Tom Harman. To make matters worse, he added, ecologically critical soils have been damaged beyond repair, and the consequences are devastating.

The wildfire was a "clear sign that the climate is changing," Harman said. "It was a real and clear indication that we have a climate crisis on our hands."

In fact, Fairburn Ings is just one of many nature reserves that have been consumed by wildfires in Britain. 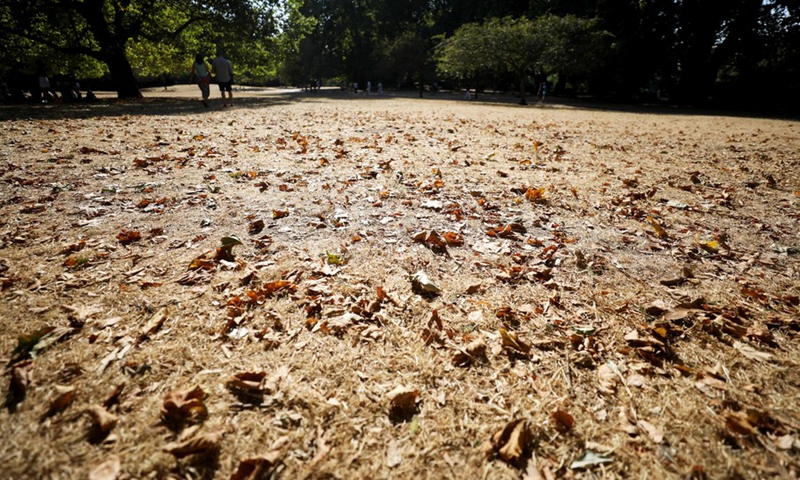 After the driest July since 1935, drought thresholds have been triggered in several parts of the country, where wildfires have caused four times as much damage as the seasonal average. Hundreds of homes were engulfed in flames, and the impact on wildlife has been massive, according to charities.

Kathryn Brown, director of climate action at the Wildlife Trusts, said that "The ongoing heatwave and drought have had a devastating impact on wildlife in the United Kingdom."

Heat waves have also been wreaking havoc across mainland Europe this summer, with many regions enduring record-high temperatures.

"We will therefore be witnessing many more extreme hot weather days."

Simultaneously, the best part of Europe has also had to suffer the worst droughts on record.

The lack of water killed dozens of deer in the Sierra de Baza Natural Park in southern Spain and hundreds of frogs around Lac Petrus in France.

With river water levels dropping, badgers have also felt the impact as they were unable to find edible earthworms. Insects could not find moist moss, and dragonflies have lost ponds, their natural habitats. Fish have had nowhere to lay their eggs.

"We are seeing the tip of the iceberg only, "Jean-Noel Rieffel, director of the French Office for Biodiversity in the Centre-Val de Loire region, told French newspaper Le Monde. "2022 looks like a landmark year in excess mortality of aquatic and terrestrial species," he said.

"We're facing a triple crisis (climate change, pollution and biodiversity loss). The three crises are all connected because the planet is one single, interconnected ecosystem. Any pressure on any Earth system will have an impact on the rest," Marco Lambertini, director general of WWF International, told Xinhua in an exclusive interview.

"We have lost so much nature over the last few decades. We're continuing to lose nature today. We need to halt, we need to reverse, and we need to be nature positive by 2030. ... By protecting nature, we effectively protect ourselves and our future," he said.

"It's in everybody's interest -- developed economies, developing economies -- to come together under a common plan that addresses climate change and nature loss. Hopefully, government leaders will understand that the only way to tackle these issues is to agree together to a common plan."