A scorching heatwave has hit Europe, sparking droughts, health warnings and forest fires, and temperatures are set to rise even further this week.

Bastille Day fireworks celebrations were banned in France as a state of emergency was declared in Italy, where daytrippers fled to the beaches.

In Spain and Portugal there were forest fires, as health warnings were issued across many European countries struggling under the oppressive heat. In the UK there were warnings the NHS could buckle under the pressure of the heatwave.

Temperatures are expected to be as high as 44 degrees in some countries, just weeks after a heatwave blitzed France, Portugal and Spain in mid-June.

Heatwaves have become more common due to climate change and will only get worse as global temperatures rise, scientists warn.

Fireworks displays for national Bastille Day celebrations on Thursday were cancelled in several cities in the South of France because of the heatwave.

National weather forecaster Météo France warned that the heatwave could be similar to that of 2003, when almost 15,000 mainly elderly people died as hospitals were overwhelmed.

Health minister François Braun launched a free heatwave helpline and compared it to the coronavirus pandemic, as orange warnings were issued in seven French regions. 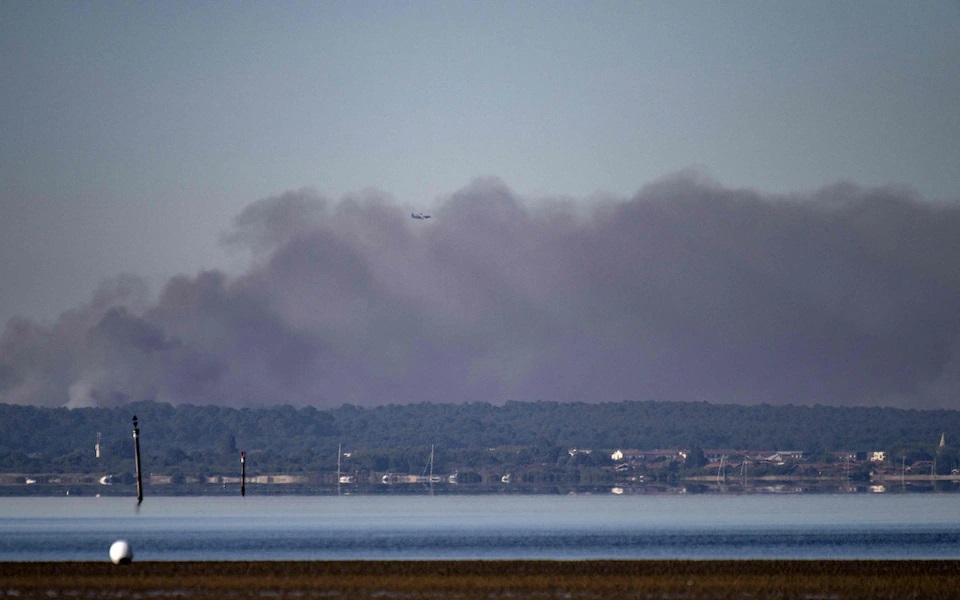 Smoke from a wildfire billows over the shoreline of Arcachon, southwestern France, CREDIT: OLIVIER MORIN /AFP

“We learnt to live with Covid. We have to learn to live with the heatwave too,” he said, as he told people to drink plenty of water.

In the south-west, more than 6,500 people were evacuated from villages and campsites as firefighters battled to bring two wildfires under control.

A new heatwave is expected to sweep through much of Italy on Thursday, with weather forecasters describing it as the “most powerful wave” of the summer so far.

Italians are bracing themselves for temperatures of up to 42 degrees Celsius in some parts of the country, with many escaping the scorching cities for the beaches and mountains.

This is the fourth wave to hit the country this summer, forcing some regions to declare a state of emergency due to the drought.

Local authorities have called on residents to stay indoors during the hottest hours of the day and to make sure children and elderly drink at least two litres of water a day.

Spain and Portugal are sweltering under temperatures reaching above 40 degrees Celsius in many parts of both countries, prompting authorities to advise people to stay indoors in the middle of the day and avoid strenuous exercise.

Close to 3,000 personnel, including some army units, are battling several wildfires in Portugal, with more than a thousand focused on the Leiria district north of Lisbon.

Firefighters battling a blaze among fields in Murtosa, Aveiro district, on Tuesday night found the charred body of a woman, although the circumstances surrounding her death have yet to be confirmed.

In Spain, virtually every region in the country is on a hot weather alert, with Badajoz, Córdoba and Seville in the south expected to see temperatures of more than 44 degrees Celsius on Wednesday and higher numbers anticipated later in the week.

"It's got everything you need to avoid heat stroke," said Jesús Aguirre.

Last month was one of the hottest Junes on record in Germany but forecasters are predicting that temperatures could regularly hit 42ºC in July and August.

"This is absolutely extreme," said Meteorologist Özden Terli, who is one of the country's best-known weather presenters.

On top of the soaring temperatures, a lack of rainfall has created the perfect conditions for forest fires, with the country’s south-west at particular risk.

With Belgium set to be engulfed by the European heatwave, the country’s rail operator is putting on extra trains to seaside hotspots with crowds expected to flock to the coast to cool down.

Rail bosses announced the move to avoid chaotic scenes during previous periods of hot weather when some passengers were forced to wait hours to board a train to the main coastal destinations of Knokke and Ostende.

The Netherlands is braced for temperatures to tip 40 degrees in some parts of the country next week as a heatwave lands on Europe’s shores.

Its weather institute has urged people to prepare for code yellow warnings, especially in the south of the country. Experts are urging people to stay indoors and shelter from the extreme heats outside.

The traditional Vierdaagse event – known as the four day march – which sees some 50,000 people walking up to 220 kilometres is set to start on Tuesday, in the midst of the heatwave. Organisers are already making special arrangements for the extreme heat.

In Luxembourg elderly and young children are being urged to not spend too much time outdoors, avoid physical activity and stay hydrated.

Meteolux, its weather warning service, has said temperatures of up to 32 degrees are expected across much of the country in the coming days

Belgium’s Royal Meteorological Institute has forecast maximum temperatures in Brussels of around 36 and 37 degrees.

Large swathes of Germany will move to the highest level of forest fire warning on Thursday.