George Scott
Editor- environmental activist
Climate change is caused mainly by human activity subsequent to the Industrial Revolution, a major part due to fossil fuel use, and secondly due to changes in land use. The effects of changing global climatic conditions on human health are significant, say experts, and the rate of change at present is the fastest it has been in a thousand years.

Global warming refers to the warming of surface air and sea surface temperatures worldwide over a period of three decades, due to human activity. Scientists say the earth’s mean surface temperature will rise by 1.5 °C above pre-industrial levels, at the current rate of 0.2°C per decade. Such an increase has already been observed in many regions, housing up to 40% of the global population, in one or more seasons.

The Intergovernmental Panel on Climate Change (IPCC) shows that the effects include rising temperatures, altered patterns of rainfall, a greater number of more severe extreme weather events, altered vector and pest habitat ranges, increased spread of vector-borne diseases, and a rise in the sea level as well as coastal erosion. In response to these changes, there will be changes in the pattern of food and water availability, the air quality will change, heat-related complications and deaths will occur, as well as disease and death due to malnutrition and malaria. 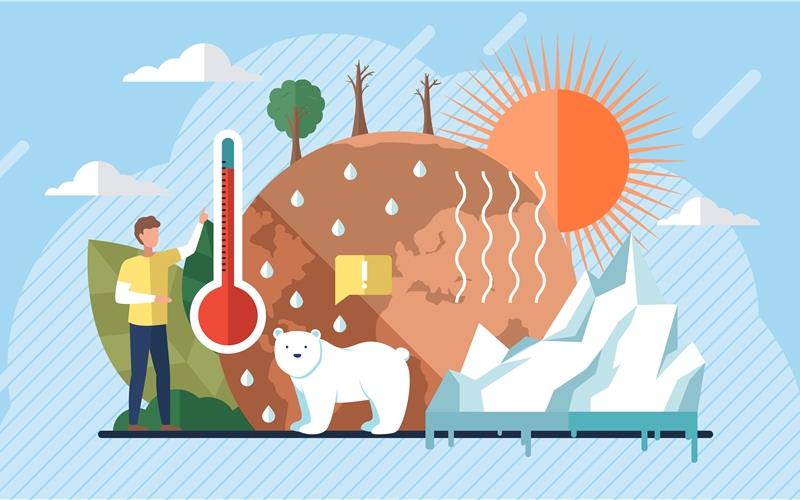 The rise in mean temperature will trigger heat waves more often, and prolong their duration. Mean daytime temperatures will go up. Earlier years have shown tens of thousands of deaths occurring each year during heat waves. In particular, 70,000 excess deaths occurred with the 2003 heat waves in Europe, mostly in the older population.

Heatwave conditions increase mortality among those with respiratory and cardiovascular disease; they may cause heat stroke and exhaustion, respiratory symptoms, and stroke. The highest excess mortality occurs among northern populations, who are used to lower temperatures, and among the older, the poor, and pregnant women, due to poor temperature regulation. Urban-dwellers are at higher risk than rural.

Increased temperatures also push up the crime rate, and increase emotional and mental instability. Kidney damage may occur with excessive heat, as well as food-borne illness due to increased bacterial growth.

Poor sleep quality accompanies a hot atmosphere and discourages exercise. This promotes many types of inflammatory disease and workplace injuries while reducing productivity.

The mean sea level will rise by 18-59 cm. Arctic ice is expected to melt completely at least once in a decade if the temperature rises by 2°C, compared to once every century if global warming is limited to below 1.5°C. The rise in sea level is expected to continue beyond the turn of this century, and to be on the order of several meters over the succeeding hundreds to thousands of years.

A rise in the sea level will lead to coastal erosion and flooding of low-lying areas. Climate change could increase the number of people at risk for such flooding ten-fold or more by 2080, which means more than 100 million people will require help for evacuation and resettlement each year.

As this large number of people are forced out of their homes and communities are banished, refugee facilities will be required, with overcrowding, disease, competition, inadequate shelter and nutrition, and eventually, conflict.

Coastal freshwater tables may become brackish, and drainage of stormwater and sewage may be obstructed. Meanwhile, the oceans are becoming acidified due to the absorption of almost a third of the carbon dioxide produced by human activity, impacting a large array of marine organisms and ecosystems, fisheries, and aquaculture.

Air pollution in cities takes well over a million lives each year at present. Air quality is predicted to become worse with warming, which also changes weather patterns around, lengthens the pollen season triggering allergies, and causes dehydration as well as other cardiovascular ill-effects.

Wildfires will become more common and more severe, creating more smoke that presents a grave hazard to the lungs. The smoke particles in the smoke are often transported long distances, affecting people far away in well-defined distributions.

Both natural and anthropogenic particles are found in the air. Fossil fuel combustion contributes gases like sulfur and nitrogen oxides and volatile organic compounds (VOCs), either directly or via the reaction of intermediate products with atmospheric compounds. Lung damage can occur, resulting in cancer, chronic obstructive pulmonary disease (COPD), and cardiovascular disease.

In addition, particulate matter (PM – tiny suspended particles and droplets) is bound to increase. Fine PM (FPM) comprises sizes below 2.5 micrometers. However, rainfall is expected to increase, which could wash out PM from the air, along with changes incited by altered stagnant air patterns and plant emissions. 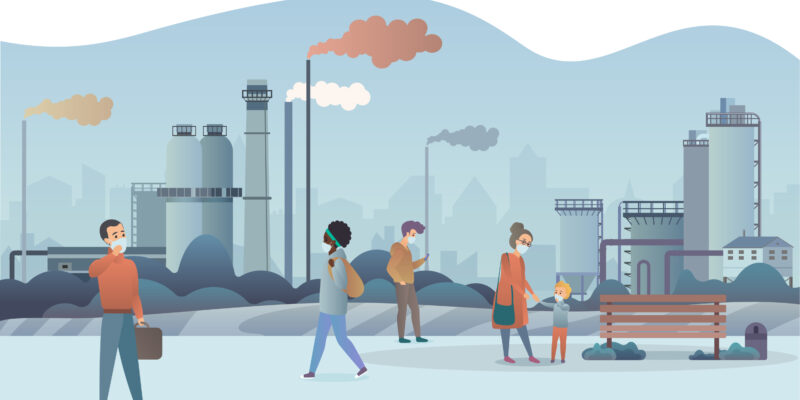 Increases in ground-level ozone accompany warm stagnant air, triggering smog formation, and causing airway inflammation and lung damage, with early death. In fact, excess mortality due to this cause is predicted to be in the tens of thousands per year.

Ground-level ozone increases are predicted to cause tens of thousands of excessive deaths annually, with a predicted increase of 4.5%.

With global warming at or below 1.5°C, it is estimated that coastal ecosystems like mangroves, seagrass, and wetlands will be severely damaged. In fact, 70-90% of tropical coral reefs may disappear, as may kelp forests, and 4-8% of insects, plants, and vertebrates will perish.

Many species will migrate to colder waters. Damage to fisheries, along with acidification, hypoxia, and dead zones in ocean water, will affect ocean ecosystems severely.

Extreme weather events like floods, droughts, storms, and very heavy rainfall are also likely to increase, putting people at risk, especially those who find it difficult to evacuate. Damage to essential infrastructure can make it difficult for people to keep themselves warm, get medical care, food or water, while carbon monoxide poisoning from improper heater use during power outages is on the rise.

During the 1990s, over 600,000 people died, with extensive property damage, due to extreme weather events. These are expected to increase in frequency several-fold by 2050.

Vector-borne illnesses like malaria, dengue, filariasis, West Nile fever, and Zika virus are all rising in incidence as their vectors spread over a wider area. This is attributed to the warming of larger regions for a longer time, changes in rainfall offering more sites for breeding, and an earlier start to the migration season. These affect the natural hosts, the insect vectors, and the behavior of the human hosts, leading to changes in transmission, incidence, and prevalence.

Over 170 million more malaria cases, and 2 billion more dengue cases, may occur by the 2030s and 2080s, respectively. As farmers take over the forest and other spaces, zoonotic diseases will increase.

Glacier melting combined with higher rates of evaporation may jeopardize drinking water sources. With the world population growing at the same time, it is estimated that over 3 billion people may not have access to enough safe water for healthy living in 2050, compared to 1.5 billion in 1990.

Nine-tenths of diarrheal disease is due to the lack of availability of safe water. Climate change may hinder current progress towards providing basic sanitation facilities to the 50% of developing country populations that lack them.

Algal proliferation in warming waters can cause toxin release. Water-borne pathogens including the cholera germ can multiply. Coupled with excessive runoff from heavy rainfall and flooding, this will contaminate water bodies used for drinking water, fisheries, and recreation with sewage, industrial and other chemicals, and pollutants, leading to epidemics of human disease.

Droughts may last six-fold longer and occur twice as frequently unless climate change is checked, say experts. Droughts aggravate water scarcity and poverty among people already hard-pressed economically. Droughts in large areas of Africa and Asia often lead to changes elsewhere, in the form of dust storms as winds erode the soil and changes in the rainfall patterns.

About 1.5 to 2.5 million square kilometers of permafrost will probably melt over the next few centuries even at the current rate of global warming.

Seafood will become inedible due to the accumulation of waterborne pollutants and other pathogens. By 2050, food security could also be compromised by heat-related reductions in crop yields by up to a fifth, even as the population almost doubles. Damage to transportation routes due to extreme weather events may disrupt food distribution.

Without the potential for agricultural improvement, sustainable development would become impossible in developing countries.

The greatest impact will be on those who are least responsible for this change, that is, people living in developing countries, though high-income countries are also at significant risk for poor health. These are also those with the least reserve, unable to prevent their slide into deeper poverty.

“The climate crisis threatens to undo the last fifty years of progress in development, global health, and poverty reduction, and to further widen existing health inequalities between and within populations.”

Coastal communities, including small islands or low-lying countries or regions, areas that are dry or vulnerable to flooding, drought, or desertification, and those with mountainous terrain, are at the greatest risk from climate change, according to the United Nations Framework Convention on Climate Change (UNFCCC).

In particular, countries with poor food security that are also prone to coastal flooding, regions that have high levels of vector-borne diseases that can expand with climate change, those that show a weather-linked increase in large-scale outbreaks of infectious disease, and those with underdeveloped healthcare or agricultural support systems, will face the greatest hardships with climate change. To adapt successfully to these changes, the community and the public health system will have to investigate and prepare for them.

The poorest communities, migrants, refugees, children, and women are already the most affected by vector-borne and water-borne disease; they suffer the most from poor sanitation, and they are typically the most malnourished. Thus, climate change will multiply the ill-effects of underdevelopment and arrest or slow down progress in providing education, food, livelihood, preventive healthcare to contain infectious outbreaks, and sustainable development.

The costs of global warming account for 1% to 3% of the total global world product, at least half of this being due to loss of life. Governments need to establish broad frameworks to ensure that sustainable development replaces the resource-hungry pollution-intensive development paradigm of the past.

Healthcare must be strengthened and early warning systems for weather events set up. Governments must focus on the well-being of people rather than consumeristic, profit-driven development strategies, to ensure that future generations can enjoy the planet.