Liang Lan
Marine and Environmental Scientist
Alarming stories from Antarctica are now more frequent than ever; the ice surface is melting, floating ice shelves are collapsing and glaciers are flowing faster into the ocean

Antarctica will be the largest source of future sea-level rise. Yet scientists don't know exactly how this melting will unfold as the climate warms.

Our latest research, published in Nature Reviews Earth & Environment, looks at how the Antarctic ice sheet advanced and retreated over the past 10,000 years. It holds stark warnings, and possibly some hope, for the future.

Future sea-level rise presents one of the most significant challenges of climate change, with economic, environmental and societal impacts expected for coastal communities around the globe.

While it seems like a distant issue, the changes in Antarctica may soon be felt on our doorsteps, in the form of rising sea levels.

Antarctica is home to the world's largest single mass of ice: the Antarctic ice sheet. This body of glacier ice is several kilometers thick, nestled on top of solid land. It covers entire mountain ranges beneath it.

The ice sheet "flows" over the land from the Antarctic interior and towards the surrounding ocean. As a whole it remains a solid mass, but its shape slowly deforms as the ice crystals move around.

While the ice sheet flows outward, snowfall from above replenishes it. This cycle is supposed to keep the system in balance, wherein balance is achieved when the ice sheet is gaining the same amount of ice as it's losing to the ocean each year.

However, satellites keeping watch from above show the ice sheet is currently not in balance. Over the past 40 years, it has lost more ice than it has gained. The result has been global rising sea levels.

But these historical observations span only four decades, limiting our understanding of how the ice sheet responds to climate change over much longer periods.

We wanted to look further back in time—before satellites—and even before the first polar explorers. For this, we needed natural archives.

Digging up Antarctica's past

We brought together various natural archives to unearth how the Antarctic ice sheet changed over the past 10,000 years or so. These included:

When we started our research, I wasn't sure what to expect. After all, this period of time was long considered fairly dull, with only small changes to the ice margin.

Nevertheless, we studied the many different natural archives one by one. The work felt like a 1,000-piece jigsaw puzzle, full of irregular-shaped pieces and seemingly no straight edge. But once we put them together, the pieces lined up and the picture was clear.

Most striking was a period of ice loss that took place in all regions of Antarctica about 10,000 to 5,000 years ago. It resulted in many meters of sea-level rise globally.

In some regions of Antarctica, however, this ice loss was then followed by ice gain during the past 5,000 years—and a corresponding global sea-level fall—as the ice sheet margin advanced to where it is today. 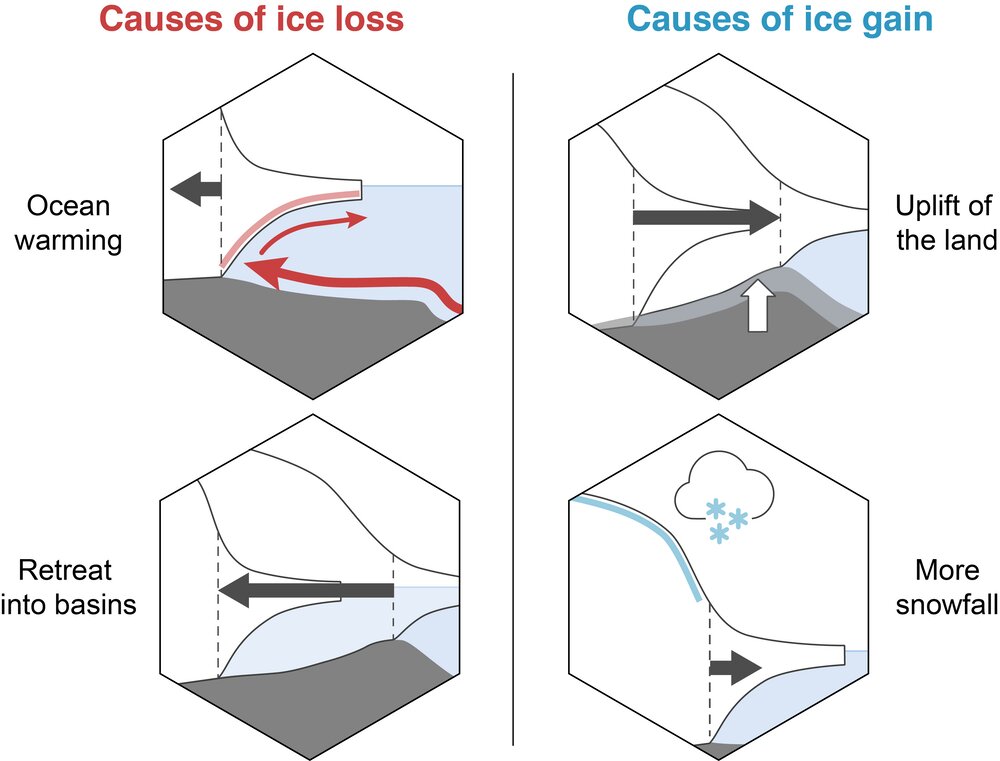 Ice loss and ice gain were driven by several factors over the past 10,000 years, many of which are predicted to occur in the future. Author provided

Understanding how and why the Antarctic ice sheet changed in this fashion offers lessons for the future.

The first lesson is more of a warning. The period of ice loss from 10,000 to 5,000 years ago was rapid, occurring at a similar rate to the most dramatically changing parts of the Antarctic ice sheet today.

We think it was likely the result of warm ocean water melting the underside of floating ice shelves—something that has also happened in recent decades. These ice shelves hold back the ice on land, so once they're removed the ice on the land flows faster into the ocean.

In the future, it's predicted ice loss will accelerate as the ice sheet retreats into basins below sea level. This may already be under way in some regions of Antarctica. And based on what happened in the past, the resulting ice loss could persist for centuries.

The second lesson from our work may bring some hope. Some 5,000 years ago the ice sheet margin stopped retreating in most locations, and in some regions actually started to advance. One explanation for this relates to the previous period of ice loss.

Before the ice began melting away, the Antarctic ice sheet was much heavier, and its weight pushed down into the Earth's crust (which sits atop a molten interior). As the ice sheet melted and became lighter, the land beneath it would have lifted up—effectively hauling the ice out of the ocean.

Another possible explanation is climate change. At Antarctica's coastal fringe, the ocean may have temporarily switched from warmer to cooler waters around the time the ice sheet began advancing again. At the same time, more snowfall took place at the top of the ice sheet.

Our research supports the idea that the Antarctic ice sheet is poised to lose more ice and raise sea levels—particularly if the ocean continues to warm.

It also suggests uplift of the land and increased snowfall have the potential to slow or offset ice loss. However, this effect is not certain.

The past can never be a perfect test for the future. And considering the planet is warming faster now than it was back then, we must err on the side of caution.