New data has revealed extraordinary rates of global heating in the Arctic, up to seven times faster than the global average.

The heating is occurring in the North Barents Sea, a region where fast rising temperatures are suspected to trigger increases in extreme weather in North America, Europe and Asia. The researchers said the heating in this region was an “early warning” of what could happen across the rest of the Arctic.

The new figures show annual average temperatures in the area are rising across the year by up to 2.7C a decade, with particularly high rises in the months of autumn of up to 4C a decade. This makes the North Barents Sea and its islands the fastest warming place known on Earth.

Recent years have seen temperatures far above average recorded in the Arctic, with seasoned observers describing the situation as “crazy”, “weird”, and “simply shocking”. Some climate scientists have warned the unprecedented events could signal faster and more abrupt climate breakdown.

It was already known that the climate crisis was driving heating across the Arctic three times faster than the global average, but the new research shows the situation is even more extreme in places. 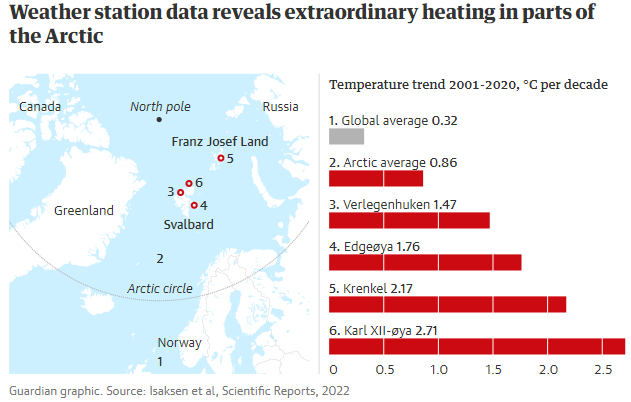 Sea ice is good at reflecting sunlight but is melting away. This allows the darker ocean below to absorb more energy. Losing sea ice also means it no longer restricts the ability of warmer sea waters to heat up the Arctic air. The more ice is lost, the more heat accumulates, forming a feedback loop.

“We expected to see strong warming, but not on the scale we found,” said Ketil Isaksen, senior researched at the Norwegian Meteorological Institute and who led the work. “We were all surprised. From what we know from all other observation points on the globe, these are the highest warming rates we have observed so far.”

“The broader message is that the feedback of melting sea ice is even higher than previously shown,” he said. “This is an early warning for what’s happening in the rest of the Arctic if this melting continues, and what is most likely to happen in the next decades.” The world’s scientists said in April that immediate and deep cuts to carbon emissions and other greenhouse gases are needed to tackle the climate emergency.

“This study shows that even the best possible models have been underestimating the rate of warming in the Barents Sea,” said Dr Ruth Mottram, climate scientist at the Danish Meteorological Institute, and not part of the team. “We seem to be seeing it shifting to a new regime, as it becomes less like the Arctic and more like the North Atlantic. It’s really on the edge right now and it seems unlikely that sea ice will persist in this region for much longer.”

The research, published in the journal Scientific Reports, is based on data from automatic weather stations on the islands of Svalbard and Franz Josef Land. Until now, this had not been through the standard quality control process and made public.

The result was a high-quality set of surface air temperature measurements from 1981 to 2020. The researchers concluded: “The regional warming rate for the Northern Barents Sea region is exceptional and corresponds to 2 to 2.5 times the Arctic warming averages and 5 to 7 times the global warming averages.”

There was a very strong correlation over time between air temperature, sea ice loss and ocean temperature. Isaksen said the rapid temperature rise would have a very big impact on ecosystems: “For instance, here in Oslo, we have a temperature rise of 0.4C a decade and people really feel the disappearing snow conditions during winter. But what’s happening in the far north is off the scale.”

Isaksen said the new information on heating rates in the area would help research by other scientists on how changes in the Arctic affect extreme weather in populous areas at lower latitudes. There is evidence that the rapid heating changes the jet stream winds that encircle the pole and influence extreme weather.

“Sea ice loss and warming in the Barents Sea in particular have been isolated in previous work as being especially relevant to changes in winter-time atmospheric circulation that are tied to extreme winter weather events,” said Prof Michael Mann, from Pennsylvania State University, US. “If this mechanism is valid, and there’s some debate over that, then this is yet another way climate change could be increasing certain types of extreme weather events [and which] isn’t well captured by current models.”