Satellites have captured the polluting power of cow burps from space for the first time ever, in a breakthrough that could help farmers slash methane emissions.

Beef and dairy have a hefty climate footprint in large part because cows burp out methane, a greenhouse gas many times more planet-warming than carbon dioxide.

Engineers at Canadian firm GHG Sat, which specialises in monitoring emissions from space, have caught these burps on camera for the first time using high-definition satellites.

In February they detected methane emissions coming from an agricultural area in California’s Joaquin Valley, and further analysis confirmed the source of the pollution as a cattle feedlot.

GHG Sat said five emissions were recorded, with cows burping out methane at a rate of up to 668 grams per hour. If this were sustained for a year, it would amount to enough gas to power 15,402 homes.

GHG Sat believes it marks the first time greenhouse gas emissions from cattle have been measured from space, thanks to advances in technologies for reading satellite images. 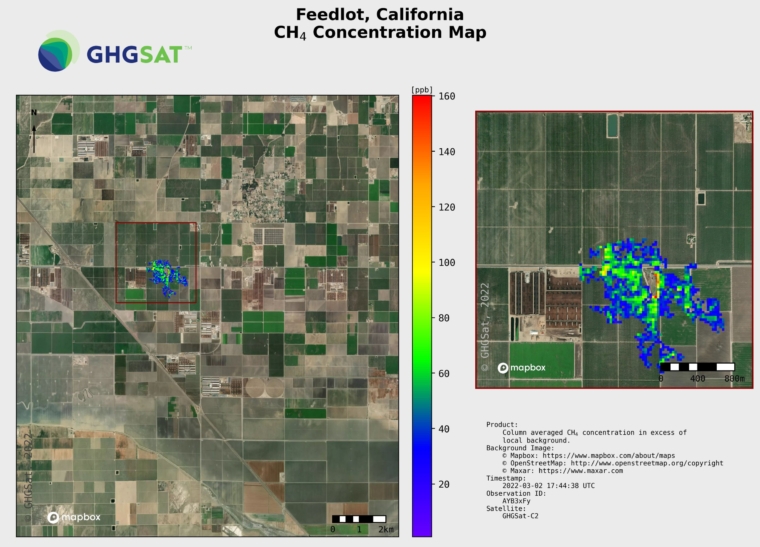 Satellite analysis reveals a feedlot in California as a source of methane emissions (Photo: GHG Sat)

“This will just be the beginning of many more observations of this type, and that starts to build a portfolio to inform industry,” he told.

Animal agriculture is a major source of greenhouse gas emissions, with cattle farming alone thought to be responsible for around 3.7 per cent of all global emissions.

Cows produce methane as they digest grass in their stomachs, in a process a bit like fermentation. Most of the methane is burped out, but cows also fart some methane gas.

Last month the world’s top climate scientists warned methane emissions must be slashed by 30 per cent this decade to help keep key climate goals in reach.

GHG Sat said its technology could be used to help farmers measure the climate impact of their herds, and experiment with new diets for the cows to curb their flatulence. At the moment obtaining accurate emissions figures for cows is costly and complex.

“This gives us an opportunity to potentially do some more verification and checking of these types of [emissions] sources,” Mr Wight said.

Research suggests that including seaweed supplements into cows’ diets can cut their methane emissions by 80 per cent. Blind taste tests suggests beef from cows fed a seaweed diet tastes no different to beef from cows on a ‘normal’ diet