Liang Lan
Marine and Environmental Scientist
With a heat wave hanging over the region, it took only a weekend for a wildfire raging near California’s northern border to swell into the state’s largest blaze this year

The McKinney Fire in Northern California’s Klamath National Forest grew to more than 51,000 acres on July 31

The McKinney Fire has burned more than 51,000 acres since it was reported Friday afternoon in the eastern reaches of the Klamath National Forest, fueled by “above normal temperatures and low relative humidity,” according to fire officials.

The fire was completely uncontained as of Sunday evening, with a fire watch in effect through Monday “for abundant lightning on dry fuels” from thunderstorms that were forecast to hit the area. “Probability of ignition,” fire officials forecast, was “100%.”

About 2,500 residents have been ordered to evacuate in rural Siskiyou County, said Courtney Kreider, a spokeswoman for the sheriff’s office. The police department in Etna, Calif., evacuated Pacific Crest Trail hikers by bus to Oregon on Sunday afternoon. Part of the popular trail was closed from Mount Etna in Northern California to Mount Ashland in southern Oregon, according to the Rogue River-Siskiyou National Forest. 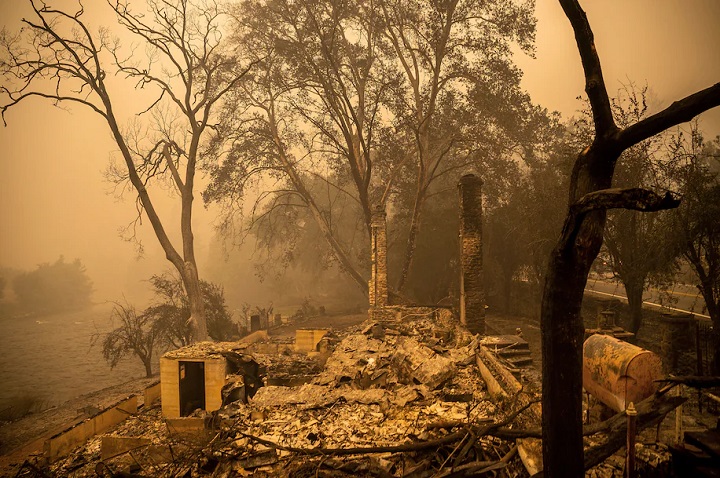 Rubble from a building scorched by the McKinney Fire on July 31. (Noah Berger/AP)

Gov. Gavin Newsom (D) declared a state of emergency for the wildfire, which “allows for more flexibility in the face of an unfolding crisis, including the suspension of regulatory statutes that may impede the emergency response and recovery efforts,” his office said in a statement.

Kreider estimated that about 100 structures had been destroyed so far, with “significant loss” along the winding Klamath River and the highway that traces alongside it, State Route 96, part of which has been closed. Included in that toll was the Klamath River community’s grocery store, post office and community hall — and the childhood home of a sheriff’s deputy, where his mother was also raised, Kreider said.

There were no confirmed fatalities or reports of injuries as of Sunday evening, she said. Sheriff’s deputies were checking on a “handful” of residents who had declined to evacuate, Kreider added.

The McKinney Fire is more than double the size of the next largest wildfire in California this year, the Oak Fire, which has burned more than 19,000 acres in Mariposa County. The Oak Fire, which started July 22, was 67 percent contained as of Sunday night.

The largest fire in the state’s history was the August Complex Fire in 2020, which scorched more than 1 million acres. Six of the seven largest wildfires in California history have happened since 2020.

Meanwhile, large wildfires are burning across the northern Mountain West. The Elmo Fire in northwest Montana has scorched more than 10,000 acres as the Moose Fire in central Idaho has burned more than 48,000 acres.

In western Nebraska, a wildfire that forced evacuations has burned about 13,000 acres and was about 30 percent contained, the Star Herald reported, citing emergency officials.