The Arctic is warming faster than anywhere else on the planet, and the toll on Greenland's massive ice sheet is becoming achingly clear.

According to new satellite data compiled by Polar Portal, a collection of four Danish government research institutions, Greenland has lost more than 5,100 billion tons (4,700 billion metric tons) of ice in the past 20 years — or roughly enough to flood the entire United States in 1.6 feet (0.5 meters) of water.

This extensive ice loss has contributed to half an inch (1.2 centimeters) of global sea-level rise in just two decades, the researchers wrote on their website.

The team's data covers the 20 years from April 2002 to August 2021 and is based on observations taken by the Gravity Recovery And Climate Experiment (GRACE) fleet of satellites, which launched in March 2002. These satellites measure changes in gravity around the world, which reflect how mass is distributed around the Earth over time. This is especially useful for estimating changes to ice mass, the Polar Portal team said. 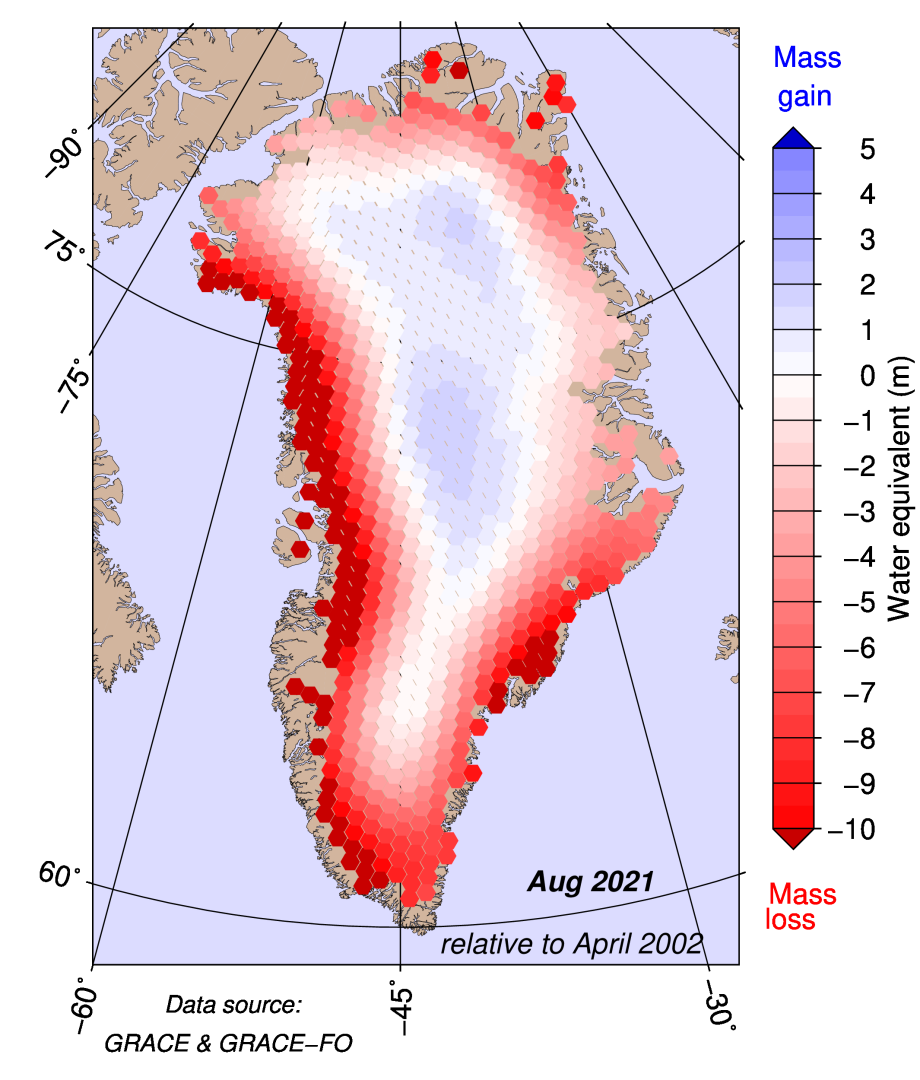 The GRACE data shows that Greenland's ice loss is most severe around the coasts, where the ice is rapidly thinning and toppling into the ocean. Ice loss is particularly stark on the West Greenland coast, where warming subsurface waters are thought to be intensifying glacial melt, according to NASA. (The GRACE mission is a joint project of NASA and the German Aerospace Center).

Greenland's ice melt is one of the main factors driving sea-level rise in response to climate change, according to NASA. Greenland is currently on track to contribute 3 to 5 inches (7 to 13 cm) to global sea-level rise by the year 2100, according to a 2019 study in the journal Nature — which could have devastating results.

"As a rule of thumb, for every centimeter rise in global sea level, another 6 million people are exposed to coastal flooding around the planet," Andrew Shepherd, lead study author and climate scientist from the University of Leeds in the U.K., told NASA in 2019. "On current trends, Greenland ice melting will cause 100 million people to be flooded each year by the end of the century, so 400 million in total due to sea-level rise."

Greenland contains the world's only permanent ice sheet outside of Antarctica. Together, Greenland and Antarctica contain 99% of the world's total freshwater reserves. If the entire Greenland ice sheet melts, it could raise global sea levels by a staggering 24 feet (7.4 m); meanwhile, Antarctica contains enough ice to raise global sea levels by more than 200 feet (60 m) if totally melted, according to the National Snow and Ice Data Center.