Normally, he heads down this path on the massive Morteratsch Glacier in late September, the end of the summer melt season in the Alps. But exceptionally high ice loss this year has brought him to this 15-square-kilometre amphitheatre of ice two months early for emergency maintenance work.

The measuring poles he uses to track changes in the depth of the pack are at risk of dislodging entirely as the ice melts away and he needs to drill new holes.

The Alps' glaciers are on track for their highest mass losses in at least 60 years of record keeping, data shared exclusively with Reuters shows. By looking at the difference in how much snow fell in winter, and how much ice melts in the summer, scientists can measure how much a glacier has shrunk in any given year.

Since last winter, which brought relatively little snowfall, the Alps have sweltered through two big early summer heatwaves - including one in July marked by temperatures near 30 Celsius in the Swiss mountain village of Zermatt.

During this heatwave, the elevation at which water froze was measured at a record high of 5,184 metres - at an altitude higher than Mont Blanc's - compared with the normal summer level of between 3,000-3,500 metres.

"It's really obvious that this is an extreme season," Linsbauer said, shouting over the roar of rushing meltwater as he checked the height of a pole jutting out of the ice.

Most of the world's mountain glaciers - remnants of the last ice age - are retreating due to climate change. But those in the European Alps are especially vulnerable because they are smaller with relatively little ice cover. Meanwhile, temperatures in the Alps are warming at around 0.3 deg C per decade - around twice as fast as the global average.

If greenhouse gas emissions continue to rise, the Alps glaciers are expected to lose more than 80 per cent of their current mass by 2100. Many will disappear regardless of whatever emissions action is taken now, thanks to global warming baked in by past emissions, according to a 2019 report by the UN Intergovernmental Panel on Climate Change.

Already, Morteratsch is much changed from the glacier depicted on the region's tourist maps. The long tongue that once reached deep into the valley below has shrunk back by nearly 3 kilometres, while the depth of the snow and ice pack has thinned by up to 200 metres. A parallel glacier Pers flowed into it until 2017 but has now receded so much that an expanding strip of grit lies between them.

The dire situation this year raises concern that the Alps'glaciers might vanish sooner than expected. With more years like 2022, that could happen, said Matthias Huss, who leads Glacier Monitoring Switzerland (GLAMOS).

"We are seeing model results expected a few decades in the future are happening now," Huss said. "I did not expect to see such an extreme year so early in the century."

Reuters spoke with glaciologists in Austria, France, and Italy who confirmed that glaciers there were on track for record losses. In Austria, "the glaciers are snow-free up to the summits," said Andrea Fischer, a glaciologist at the Austrian Academy of Sciences.

Seasonal snowfall, apart from replenishing ice lost during summer, protects glaciers from further melt by providing a white cover that reflects sunlight back out to atmosphere better than darker ice - sullied by dust or pollution - can do.

But at the Grand Etret glacier in northwest Italy, only 1.3 metres of snow had accumulated during this past winter - 2 metres less than the annual average for the 20 years up to 2020. 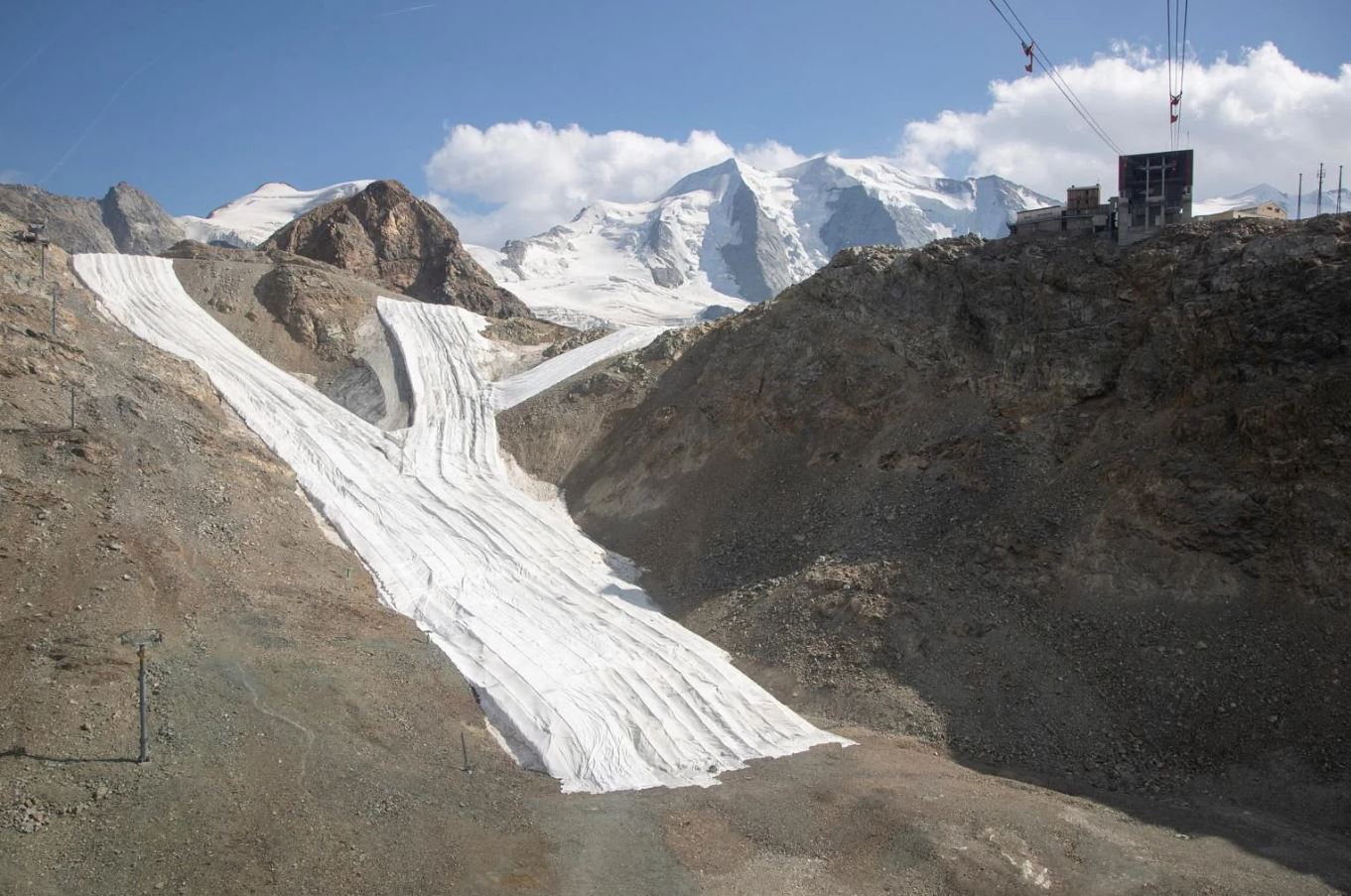 Blankets cover winter snow near the Alpine resort of Pontresina in Switzerland on July 21, 2022. PHOTO: REUTERS

This year's Alpine ice losses, registered even before the biggest melt month of August, surprised scientists to some extent, as many of the glaciers had already lost their lower-lying snouts. Because they had retreated up the mountain, where temperatures are cooler, scientists thought they should have been better protected.

"You can easily imagine the final results after summer will be … extensive loss of glacier coverage in the Italian Alps," said Marco Giardino, vice president of the Italian Glaciological Committee.

Data shared exclusively with Reuters shows that Morteratsch is now shedding about 5 centimetres a day and is already in a worse state than it would normally be at the end of an average summer, according to data from GLAMOS and the Universite libre de Bruxelles.

The nearby Silvretta Glacier has lost about 1 metre more than at the same point in 1947 - the worst year in its database stretching back to 1915.

Himalayan glaciers are also on track for a record ice loss year, scientists told Reuters. When the summer monsoon season arrived in the Kashmir region, for example, many glaciers had already shrunk drastically, with their snowlines starting high up the mountain, after a March-May heatwave marked by temperatures above 48 deg C in northern India.

An early June expedition in India's Himachal Pradesh found that the Chhota Shigri Glacier had lost much of its snow cover.

"The highest temperature in over a century in March through May clearly had its impacts," said glaciologist Mohd Farooq Azam at the Indian Institute of Technology Indore. 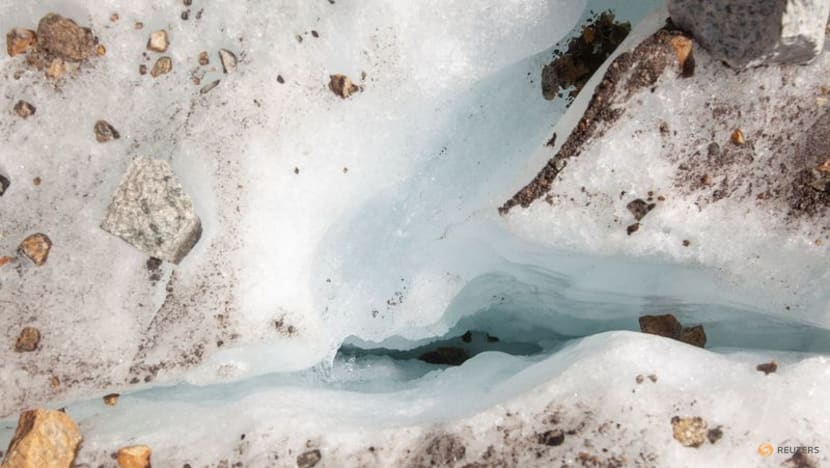 Meltwater flows into an ice crevice at the Pers Glacier in Switzerland. PHOTO: REUTERS

Vanishing glaciers are already endangering lives and livelihoods. Earlier this month, a glacier collapse on the Marmolada in Italy killed 11 people. Days later, a collapsing glacier in the Tian Shan mountains of eastern Kyrgyzstan triggered a massive avalanche, sending ice and rocks hurdling toward passing tourists.

Above the Swiss village of Saas Fee, a path leading to a mountain hut once passed through a summer snowfield on top of the Chessjen Glacier.

"It's too dangerous now," due to the risk of falling rocks, once held together by hard-frozen ice, said hutkeeper Dario Andenmatten while gazing out over a barren landscape dotted with glacial lakes. Nearby, the rumble of stones tumbling from the mountain could be heard.

Swiss residents worry that the glacier losses will hurt their economy. Some area ski resorts of the Alps, which rely on these glaciers, now cover them with white sheets to reflect sunlight and reduce melting.

Swiss glaciers feature in many of the country's fairy tales, and the Aletsch Glacier is considered a UNesco World Heritage Site. Losing the glaciers "means losing our national heritage, our identity," said hiker Bernardin Chavaillaz. "It's sad."