George Scott
Editor- environmental activist
As the world stopped functioning and went inside their homes while a virus raged outside, greenhouse gas emissions had gone down. However, a new study reveals that levels of methane continued rising in 2020 despite the economic slowdown caused by the Covid-19 pandemic.

Scientists from the University of Leeds have analysed new data from Europe's Copernicus Sentinel-5P satellite to identify locations with large surges of methane emissions, the second most important greenhouse gas in our atmosphere. The findings have been presented at the Living Planet Symposium which took place last month in Bonn, Germany.

Around 40 per cent of methane emissions comes from natural sources, while 60 per cent comes from anthropogenic sources such as agriculture, fossil fuel exploitation, and landfills.

"Methane measurements from 2020 showed the largest annual increase of methane concentrations since the 1980s, with this record surpassed in 2021. The year 2020 was unique owing to the global pandemic, yet methane concentrations continued to rise despite a reduction in economic activity," The European Space Agency said in a statement.

Scientists are yet to fully understand the driving force behind the recent trends in global methane concentrations owing to the uncertainty surrounding the sources and sinks. 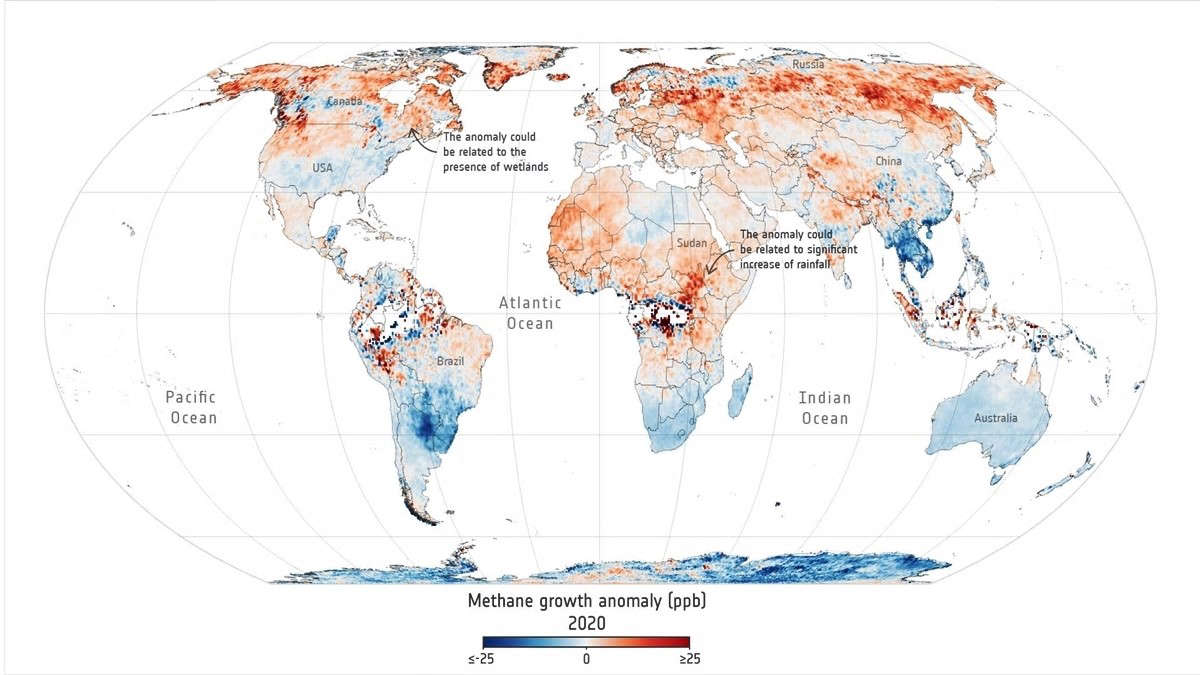 This global map shows the annual increase of methane emissions relative to the global mean annual increase and has been created using data from the Copernicus Sentinel-5P satellite. (Photo: ESA)

The data reveals that 2020 was likely to have been a period of large methane fluxes in these regions. Satellite data was also compared with a chemical transport model called TOMCAT, which simulates methane in our atmosphere.

"Copernicus Sentinel-5P observations have shown that global wetlands continue to be a large contributor to the atmospheric methane budget, and it is important that further work is carried out to fully understand how they will respond to changes in our climate."Emily Dowd, Ph.D. student from the University of Leeds said.

Apart from methane, previous studies have also shown that the lockdowns had a very modest reduction in tiny airborne-particle pollution, known as PM 2.5. Researchers found minimal changes in the US and Europe, while a marked decrease in Nitrogen Oxide was only observed in China.

In a study, they compared the PM 2.5 levels over three years during the months that coincided with each region's lockdown phases but found no significant changes.

"Intuitively, you would think if there is a major lockdown situation, that we would see dramatic changes, but we didn't. It was kind of a surprise that the effects on PM 2.5 were modest." Melanie Hammer, a visiting research associate at Washington University, who led the study had said at the time.