Liang Lan
Marine and Environmental Scientist
U.S. military bases in the Arctic and sub-Arctic are failing to prepare their installations for long-term climate change as required, even though soaring temperatures and melting ice already are cracking base runways and roads and worsening flood risks up north, the Pentagon’s watchdog office said Friday.

The report from the inspector general of the Department of Defense provides a rare bit of public stock-taking of the military’s state of readiness – or lack of readiness – for the worsening weather of a warming Earth.

The U.S. military long has formally recognized climate change as a threat to national security. That’s in part because of the impact that intensifying floods, wildfires, extreme heat and other natural disasters are having and will have on U.S. installations and troops around the world. 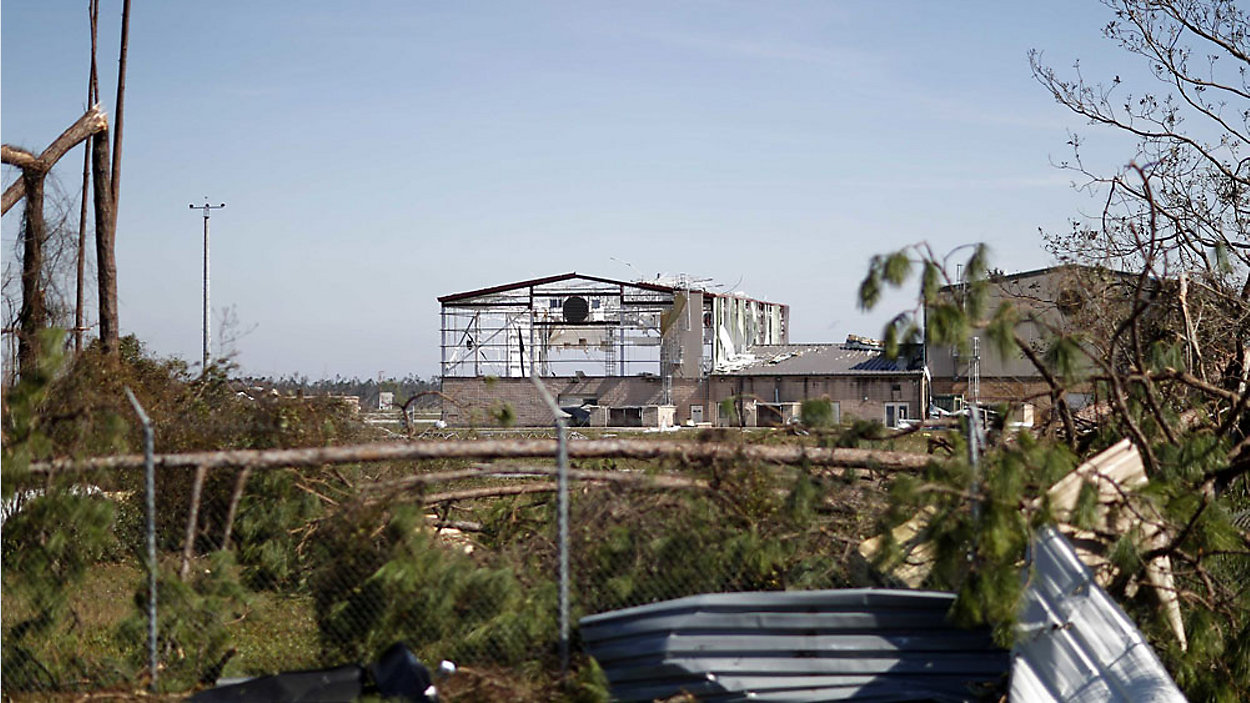 FILE - In this Oct. 11, 2018, photo, an airplane hanger at Tyndall Air Force Base is damaged from hurricane Michael in Panama City, Fla. (David Goldman/AP, File)

Increasing hurricanes, flooding, storms and wildfires in recent years have caused billions of dollars in damage to Florida’s Tyndall Air Force Base, Nebraska’s Offutt Air Force Base and other U.S. military installations, and interrupted training and other operations.

For years, laws, presidential orders and Pentagon rules have mandated that the military start planning and work so that its installations, warships, warplanes and troops can carry out their missions despite increasingly challenging conditions as the use of fossil fuels heats up the Earth.

While even acknowledging climate change was a career risk for administration officials under former President Donald Trump, President Joe Biden directed faster, more sweeping action on climate change by the Department of Defense and other agencies as one of his first acts in office.

Despite Biden’s emphasis, inspectors visiting the United States’ six northernmost military bases last June and July found none were carrying out the required assessments and planning to prepare their installations and operations against long-term climate change.

Further, “most installation leaders at the six installations we visited in the Arctic and sub-Arctic region were unfamiliar with military installation resilience planning requirements, processes, and tools,” the inspector general reports said.

A Pentagon spokesman did not immediately respond to a request for comment Friday. The inspector general report cited Defense officials as saying that the Biden administration has finished or is working on many of the report’s recommendations to better incorporate climate preparations at bases and across military branches, and would increase resources to bases to make that possible.

One of the bases is in Greenland and the other five in Alaska: Thule Air Base, Joint Base Elmendorf-Richardson, Clear Space Force Station, Eielson Air Force Base, Fort Wainwright and Fort Greely.

The Arctic and sub-Arctic are important to U.S. strategic aims in part because of rising tensions and competition with Russia and China, and in part because sharply rising temperatures are melting sea ice and opening up both shipping lanes and access to the region’s oil and other resources, increasing interest and traffic in the region.

The Defense Department also sees “the Arctic is a potential vector for an attack on the U.S. homeland, a region where Russia and China are operating more freely, and a strategic corridor for DoD forces between the Indo-Pacific and Europe,” the report notes.

The inspectors found the kind of problems associated with worsening climate change already causing trouble at the U.S. bases.

At Fort Wainwright in Alaska, heightened wildfire risks in 2019 interrupted training for two Pacific Air Force squadrons, so that one was able to carry out only 59% of planned training for a period, the report said.

Many of the specific discussions of climate risks at the six bases were blacked-out in the version of the report made public Friday.

But inspectors photographed and described some. That included cracked and sunken runways undermined by melting ice, damaged hangers and roads, and a collapsed rock barrier that had been piled up to hold back floodwater from a river swollen by glacial melting, at Thule in Greenland.

Leaders at all six bases visited noted that kind of damage, inspectors said, “however, officials from five of these installations said they had not begun incorporating future climate risks into their installations’ planning.”

“They stated that their day-to-day focus was on reacting to immediate problems or reducing risk to existing hazards, rather than planning for future hazards,” the report noted.

The Arctic is warming two to three times faster than the rest of the world. A March heat wave that hiked Arctic temperatures 50 degrees (30 Celsius) higher than normal stunned scientists.