Liang Lan
Marine and Environmental Scientist
Politicians are proposing regulating or banning flights by such planes after a summer of extreme heat and soaring energy prices prompted growing calls to tackle the causes of climate change.

A private jet at an airport in Nice, France, in 2021. Such planes are estimated to cause five to 14 times as much pollution as commercial planes per passenger, according to one study.

PARIS — As France reels from a summer of extreme temperatures and soaring energy prices, prompting increasingly urgent calls to rein in polluters contributing to global warming, one high-flying culprit is finding itself in the cross hairs: the private jet.

In recent days, France’s transportation minister called for flights by such planes to be restricted because of their outsize contribution to climate change, while a prominent lawmaker for the Green Party said he would soon introduce a bill to ban them altogether.

The announcements have struck a chord in France, where weeks of severe drought and wildfires have brought home the realities of global warming, stoking a larger debate about consumer responsibility for addressing climate change.

Calls for better conservation of energy are also growing in France, like in much of Europe, as the war in Ukraine squeezes supplies of gas and oil.

“Without resorting to demagogy or launching ad hominem attacks, there is certain behavior that is no longer acceptable,” Clément Beaune, the transportation minister, told Le Parisien newspaper on Saturday, as he announced his plan to regulate private jets.

Mr. Beaune’s advisers said he was considering several options, including requiring companies to disclose trips taken on private planes, or expanding the European Union’s emissions trading program — which caps how much carbon companies are allowed to emit — to the jets. Mr. Beaune said he would consult with bloc partners on the issue.

The aviation sector is already considered one of the world’s top carbon emitters. And private jets are estimated to cause five to 14 times as much pollution as commercial planes per passenger, and 50 times as much as trains, according to a study published last year by Transport & Environment, a group campaigning for cleaner transportation.

The study showed that France, with a capital city in the north and a Mediterranean Riviera prized by the superrich in the south, had the second-highest level of emissions from private jets in Europe, after Britain. In 2019, one-tenth of all of the country’s outbound flights were with private jets, according to the study.

In recent months, some social media accounts in France have started tracking flights several French billionaires take with the jets, adding to the public outcry over the use of the planes.

On Twitter and Instagram, popular accounts with names like I Fly Bernard — a reference to Bernard Arnault, the head of the luxury giant LVMH and one of the world’s richest men — have made public the billionaires’ trips and released estimates of their carbon emissions.

Bernard Arnault of the luxury giant LVMH aboard a private jet in 2004. On social media, accounts with names referring to him have released information about private flights taken by some billionaires.

On Friday, I Fly Bernard wrote on Twitter that the private jet belonging to the company of the French media mogul Vincent Bolloré had made three flights on the same day in a journey between France and Greece, releasing 22 tons of carbon dioxide, the equivalent on average of 10 years of emissions for a car in France, based on figures from the organization Greenpeace.

“This simple little tool is extremely powerful because you suddenly understand that something is wrong,” Julien Bayou, a member of France’s National Assembly, the lower house of Parliament, and the leader of the Green Party said, referring to the social media trackers.

Mr. Bayou said he was planning to introduce a bill in October, when the Parliament reconvenes after a summer break, to ban private jets. He added that a ban on other energy-intensive private transportation like yachts would also be considered. “​​It’s a question of justice and equality,” he said.

Last year, France passed a climate law that prohibited domestic flights for journeys that can be made by train in less than two and a half hours — unless they connect to an international flight — but the ban exempted private jet trips.

Mr. Bayou said that his party had discussed banning private jets in the past but that the proposal had gained momentum only in recent weeks because “it’s perhaps the first time that we see that climate change is profoundly unequal.”

A scorching summer this year has made the reality of the ravages of climate change all too apparent to France, with wildfires ripping through the southeast and the most severe drought on record drying up water reserves in dozens of municipalities.

As the authorities imposed water restrictions in almost all of mainland France, conflicts erupted, with many people questioning what they saw as privileges granted to the wealthy.

Outdoor jacuzzis have been vandalized, and farmers have challenged bans on irrigating their fields. In southern France, climate activists filled golf course holes with cement to protest against the exemption of greens from water bans “for a bourgeois elite.”

Emmanuel Combet, an economist at the publicly funded French Environment and Energy Management Agency, said there had been a growing debate in France about the role of the wealthiest people in conservation efforts.

A paper released last year that Mr. Combet co-wrote estimated that a household in the richest 10 percent of France emits on average more than twice as much carbon dioxide as a household in the poorest 10 percent. The disparity is even more striking when it comes to transport-related emissions, with the richest group emitting more than three times as much as the poorest. 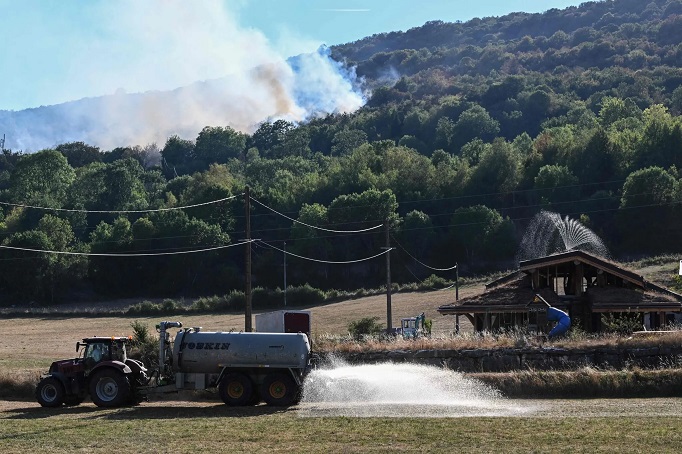 A tractor irrigated a field at the foot of a hill where a wildfire raged near Cernon, in eastern France, in August. Summer wildfires have brought home the realities of global warming.

But he also pointed to the fact that some wealthy households emit less than poorer ones thanks to investments in cleaner energy, such as using electric heating instead of oil.

“Debates on the fairness of the environmental transition must not be limited to the rich-poor divide,” Mr. Combet said.

President Emmanuel Macron has in the past been criticized for environmental measures that seemed to favor metropolitan elites at the expense of working class people in rural areas. In late 2018, after the government announced it would raise taxes on gasoline and diesel as part of a move to nudge drivers toward cleaner energy, protests broke out across France, leading to the so-called Yellow Vest movement that convulsed the country.

While Mr. Beaune’s proposals are contested by some government officials, his call to crack down on private jets seems intended to signal that the conservation efforts recently called for by Mr. Macron apply to all.

“Private jets have a symbolic value,” Olivier Véran, a government spokesman, told the radio station France Inter on Tuesday. “The French must not get the impression that it is always the same people who are asked to make an effort — that is, the working and middle classes.”