Debbie Banks
Journalist, writer, photographer & activist
The risk is highest for insect populations in temperate regions such as the continental U.S., according to the study.

The swings in temperature that accompany global warming could spell trouble for insect populations the world relies on for pollination and food production.

A paper led by Northeastern doctoral student Kate Duffy and published in an October edition of Nature Climate Change uses data science to show that, in addition to rising temperatures, fluctuations in temperature increase the risk of insect extinction in the decades ahead.

Of the 38 insect species studied in the research led by Duffy, nearly all were at risk of being wiped out at some point between 2050 and 2100.

"We found that there were an increasing number of events where the population crashed to zero under future climate simulations," says Duffy, who in August obtained her Ph.D. in interdisciplinary engineering from Northeastern's Sustainability and Data Sciences Laboratory in the civil and environmental engineering department.

She says catastrophic events can represent conditions that are too hot or too cold for insects, which being cold blooded, cannot generate their own form of internal heat.

Insect population collapse would devastate the food chain and sanitation, which depends on insects for cross-pollination and waste disposal, says Auroop Ganguly, a Northeastern professor and director of the SDS Lab and Kate's dissertation adviser.

"They fill so many critical ecosystem niches," Duffy says.

The study determines, mathematically and statistically, what is expected to happen to insect populations around the world during a time of high greenhouse gas emissions.

"This ability to generate insights by connecting across disparate scales—from global climate or earth system models to laboratory and field studies—is something that goes to the heart of adaptation science. This is something incredibly interesting," Ganguly says.

Previously, research has focused on the environmental impacts of rising temperatures, he says.

"Now we are saying it's not just that. There's a need to look more at these fluctuations and say how to then maintain ecosystems, ensure ecosystem services and ways to preserve and restore insect populations," Ganguly says.

The risk is highest for insect populations in temperate regions such as the continental U.S., according to the study.

"There's been a kind of a debate in the literature about whether tropical or temperate insects are more at risk from climate change," Duffy says.

"Our finding is that temperate species are more at risk," she says.

Ganguly, whose lab has reported on findings that temperature fluctuations are a part of global warming, says the swings of temperature may be larger in temperate zones.

Duffy's research on dynamic growth in insect populations found 16 of 38 insect species studied experienced a "significant increase" in stability, while the stability of 10 declined.

But the finding that nearly all 38 populations are at risk of collapse in the years to come is not a contradiction, Duffy says. 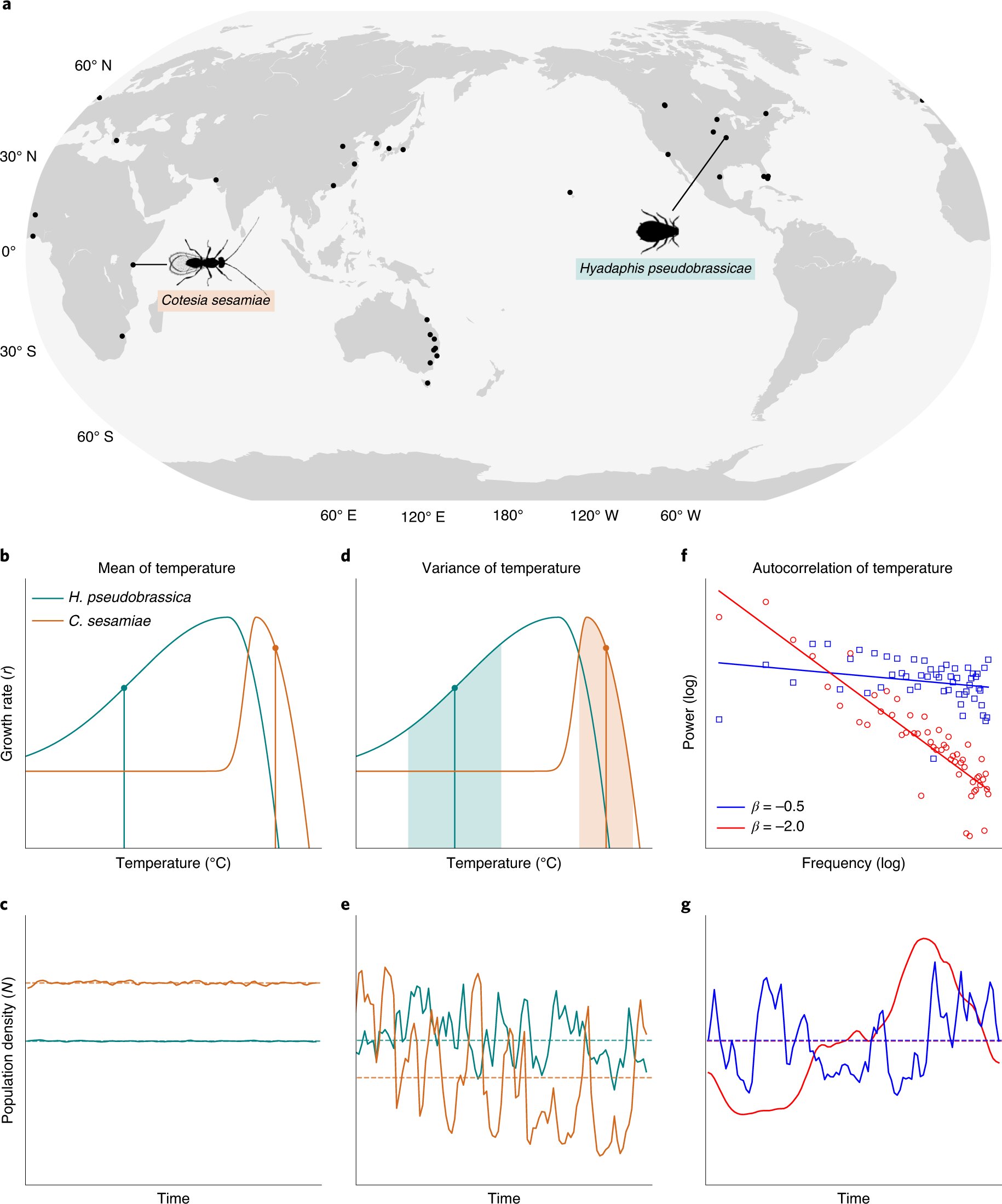 "We thought a lot about this when interpreting results," she says. "We found that the two findings were not actually at odds. The population could become larger on average over time, but one extreme event could cause the population to dip to zero."

Duffy used data from field studies of biting insects such as horse flies and crop pests and crop pest parasites because those are the insects scientists have previously studied for their impact on human populations.

But don't think their disappearance would benefit the planet, Ganguly says. In addition to their being stand-ins for more overtly beneficial insects, "even pesky insects are important for our ecology," he says.

Duffy and Ganguly say the paper is a starting point for more detailed studies that incorporate additional environmental factors such as precipitation, relative humidity and wind patterns.

"All of these could be important," says Ganguly, who is also chief scientist in the advanced computing, mathematics and data division at Pacific Northwest National Laboratory.

"This is not the final study that will be done on this topic," he says. "This is a starting point. I count myself lucky that we have professor Gouhier as a long-time collaborator, with whom we have co-authored other papers in related areas, including one in the journal Nature."

In an editorial note, the editors of Nature Climate Change say that "climate change ecology has largely focused on the impacts of temperature increases on organism survival."

"The work of Duffy and colleagues instead investigated temperature variability, an understudied impact which has been proposed as an even greater risk to species."

"Their work highlights the importance of going beyond species survival projects that focus on static minimum, maximum or average temperature values," the editors say.

Duffy did the bulk of work on the study while a doctoral student in Ganguly's SDS Lab.

Duffy says her research paper "was very exploratory in its path. When we started it, I don't think any of us knew exactly where we were going with it."

"There are still a lot of questions left to be answered," she says. "It would be really exciting to bring the dynamical modeling together somehow with models that can account for different ecological factors such as species interaction and different climate factors beyond just temperature."

Even if greenhouse gas emissions miraculously stopped overnight, some of the environmental impact on insect populations will remain, Ganguly says.

He says that even as he acknowledges the dangers posed by the risk of extinction, he is not pessimistic.

"What this immediately calls for is a comprehensive resilience approach for climate-stressed ecosystems, especially a more well designed and informed strategy for preservation and restoration given our findings that temperature fluctuations are also important," he says.