Hannah Steiner
marine wildlife conservation and environmental activist
Daily global emissions of CO2 fell by 17% at the peak of the shutdown because of measures taken by governments in response to Covid-19, say scientists.

The most comprehensive account yet published says that almost half the record decrease was due to fewer car journeys.

But the authors are worried that, as people return to work, car use will soar again.

They fear CO2 emissions could soon be higher than before the crisis.

They are urging politicians to grasp the moment and make real, durable changes on transport and personal mobility.
In the UK, Transport Secretary Grant Shapps has pledged £250m for improvements to cycling and walking infrastructure. Other countries are also looking at similar plans.

The lockdowns that most governments have implemented in response to Covid-19 have had a significant impact on the carbon-producing activities that are embedded in almost everything we do.

Road transport has declined hugely, as has aviation.

However, now that the UK is beginning to return to work, Mr Shapps said people should drive to work rather than use public transport, should walking or cycling not be an option.

"If you can't walk or cycle but you do have access to a car, please use it rather than travelling by bus, train or tram," he said.
Industry has temporarily closed down and demand for energy all over the world has crashed.

Now in detailed analysis, researchers have shown how those changes have impacted our emissions of CO2.

They've calculated the fall off in carbon based on the lockdown policies implemented in 69 countries that between them account for 97% of global emissions.

During the peak of the crisis in early April, daily emissions dropped by 17% compared to the previous year, meaning around 17 million tonnes less CO2 were emitted every day.

The key to the fall has been cars. Surface transport emissions have declined by 43%, the same amount as the drop from industry and power generation combined.
While the aviation slowdown has grabbed headlines for the economic impact, it only accounts for 10% of the decrease during the pandemic.

China has been responsible for the biggest drop, followed by the US, Europe and India.

If some restrictions on economic activity stay in place worldwide until the end of the year, then global emissions will likely drop by 7%.

If pre-pandemic levels of transport and economic activity return by mid-June, the annual fall would be around 4%.

But the research team that carried out this work is concerned that the rebound, especially on the roads, could see a carbon surge. 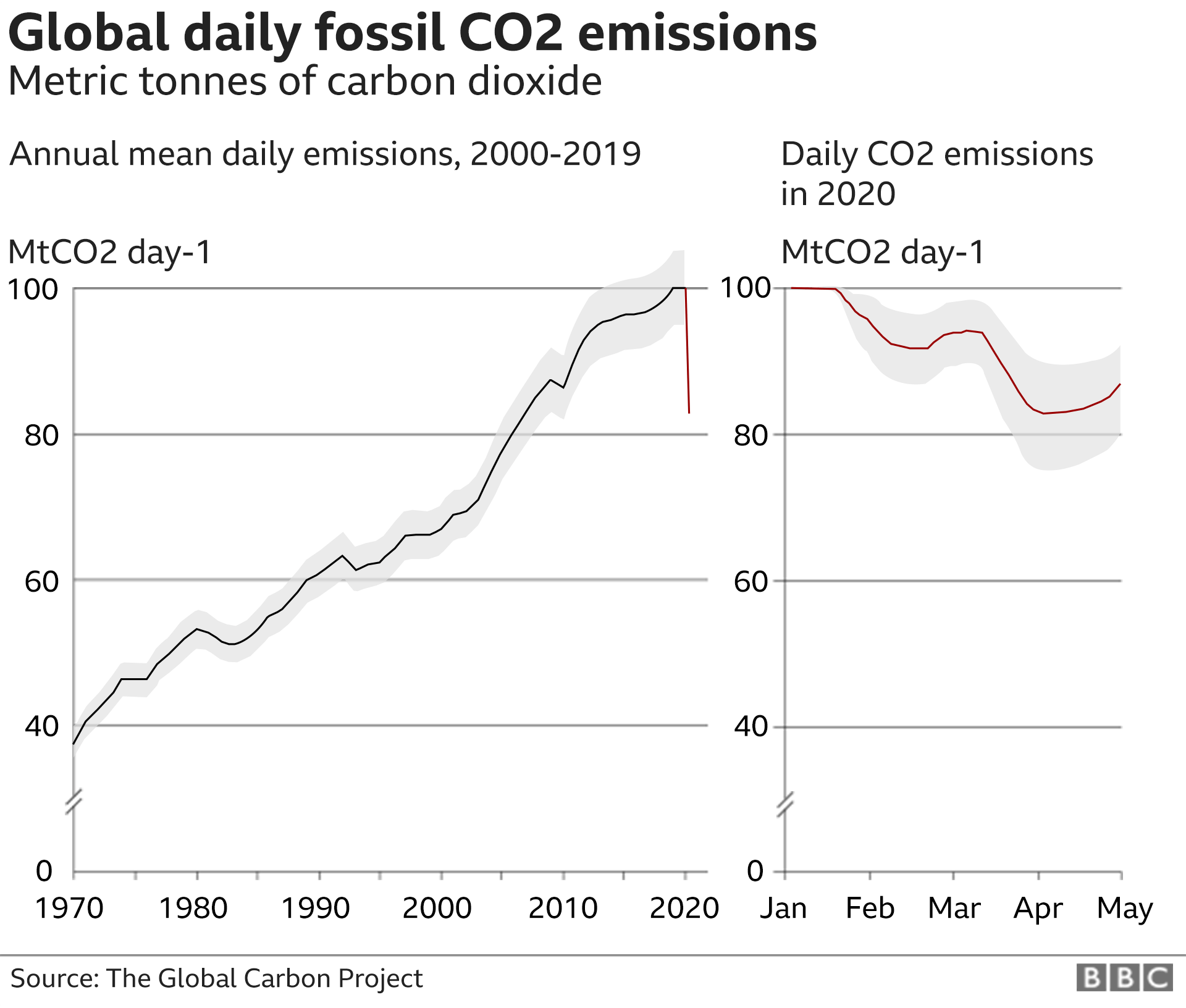 He told Radio 4's The Life Scientific programme that his team discovered a huge mismatch between emissions declared by the car firms and real readings on the road.

Prof Kelly said he reported it to the Department for Environment, Food and Rural Affairs (Defra), but they didn't publish his findings. He said work undertaken subsequently in the US led to legal action against car makers that had installed "defeat devices" to fool regulators.

The government didn't deny the account. A spokesperson said: "We are taking urgent action to improve air quality and our Clean Air Strategy has been commended by the World Health Organization as an 'example for the rest of the world to follow'".

Meanwhile, on the Covid-19 crisis, he said levels of the pollutant NO2 had fallen by up to 60% in London since the fall in traffic under lockdown.

Levels of another pollutant, sooty particles, remained at harmful concentrations.

"A big worry that people will naturally want to go back to their cars to go to work, and that could rebound the emissions to the same level or even higher than before, once everybody goes back," said Prof Corinne Le Quéré from the University of East Anglia, who led the analysis.

The researchers say that fundamental, systemic change is needed if the emissions curve is to be flattened in a way that would limit the very worst impacts of climate change.

When it comes to transportation, there are huge opportunities, according to Prof Le Quéré.

She says that after the global financial crisis in 2008, some governments like China, US and Germany made significant investments in wind and solar energy and this drove down the prices of these renewables.
"Here now in 2020 we're very close to the same situation in electric mobility," she told BBC News.

"Battery prices have come down, we have lots of models and governments are going to try to boost their economies."

"So if these two things can align, then it could make a huge difference to the transportation of tomorrow."
Grabbing the opportunity that the virus has presented is also at the forefront of corporate thinking on climate change.

A letter signed by 155 major companies, representing $2.4 trillion (£1.96 trillion) in market capitalisation, calls for a net-zero emissions response to the covid crisis.

Corporations including Carlsberg, Iberdrola, EDF and Coca Cola Europe say they want governments to "prioritise a faster and fairer transition from a grey to a green economy".
The authors of the latest analysis on carbon emissions agree that now is the moment for action. They point to the fact that while emissions of CO2 may be temporarily reduced, all the while CO2 concentrations are lingering in the atmosphere, warming the planet.

It will take a a dramatic shift to change that.

"I think very much that we are at a crossroads. And at this point, like the UK prime minister Boris Johnson said, it could go either way."

"It could go either way."

Carbon’s Impact on the Largest Desert of the World

Will the top CO2 emitters change their ways? And if not, who is going to save the day?

9 Ways to Combat Microplastics at Home

Is The Plastics Crisis Really Affecting Our Fertility?

Human rights must be at heart of new biodiversity framework, experts say