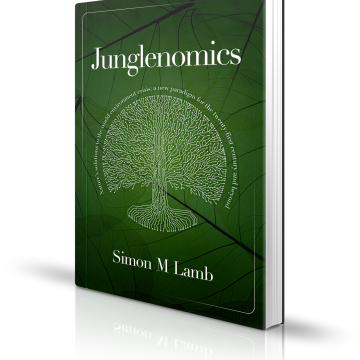 Junglenomics is all about protecting and restoring the natural environment and its biodiversity by introducing a form of economics that imitates the workings of natural ecosystems.

The book begins by tracing the origins and growth of our environmental problems from the birth of farming to the development of modern money-based economies. It argues firstly that, just like species in ecosystems, we humans are genetically programmed to seek out new resources; and secondly that we inhabit a worldwide “economic ecosystem” in which people act out roles that are the exact equivalent to species in natural ecosystems. The only real difference is that ours is a “virtual” ecosystem, where rather than needing to evolve physically to occupy a new role, we are “avatars” who can step in and out of roles as the opportunity arises. In the economic world, technology is the equivalent to evolution, and the roles of money, innovation and markets have combined to evolve a whole array of niches where none previously existed, for example in electronics, energy and financial services.

This has brought a unique and often devastating set of problems. There has been a huge proliferation of economic niches exploiting the world’s resources so fast and furious that it has left the rest of the “economic ecosystem” behind. This is mostly because there has not been time for enough clean-up “species”, which we find everywhere in Nature, to evolve alongside them. Natural ecosystems have no waste because evolutionary change is very slow, and that slowness allows the discarded waste that comes from the activities of one species to become a vital resource for another. The consequence of high-speed economic evolution is that we have a large supply of ‘dirty’ big beasts colonising and dominating the economic ecosystem, with the supply of “detrivores” to clean up after them lagging far behind. Junglenomics’ conclusion is thus that the chief cause of our environmental problems is much too much ‘dirty’ economic evolution, much too fast.

So how can we now establish the kind of balance that natural ecosystems enjoy and stop ourselves from damaging the natural world ever further? The answer, Junglenomics argues, is that balance between economics and ecology can yet be found by using highly successful natural ecosystems as a blueprint. Only in this way can the world achieve benign economic growth while conserving valuable ecosystems and their biodiversity. This involves, among many other things, nurturing and fast-tracking “good” technology and environmentally benign markets to control or eliminate “bad” ones; by establishing economic “symbiosis” to clear up behind polluters; by enlisting powerful economic actors in pursuit of ‘green’ profit to conserve and restore vulnerable wilderness; and by re-valuing environments and biodiversity to make them more valuable intact and alive than destroyed and dead.

In subsequent chapters, the Junglenomics paradigm is applied variously to pollution, land degradation, marine ecosystems, wildlife markets, wilderness destruction (including rainforests), and to the overall decline of biomass and biodiversity. *

Junglenomics concludes that a World Environment Organisation is needed to disseminate ideas efficiently, share new technology and co-ordinate policy. It argues that we cannot cure new problems with old, failed policies; that a fresh mindset is needed to tackle the enormous environmental challenges facing the world; and that the Junglenomics paradigm - Nature’s paradigm - is the only way to achieve this for the long term.

*a longer synopsis covering these chapters is available on request.

There's No Such Thing as Bad Weather

PLANT A TREE- SAVE THE PLANET